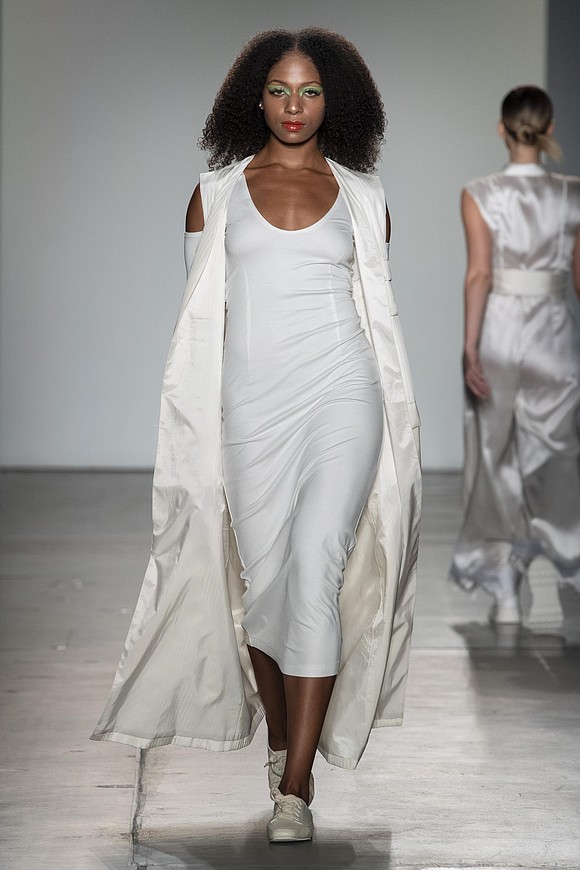 Bailuyu by Fu Wenjie’s latest collection opened with a whispery white pristine gown that paved the way for a beautifully designed symphony of soft styles. Coming down the runway piece by piece along with the music, the clothes were mesmerizing. The collection is a collaboration between the designer and her son, Justin Du. Their elegant, ready-to-wear womenswear was paired with laid-back minimalist footwear and slicked back hairstyles. The looks were simply beautiful.

A minimalist design concept was juxtaposed by a richly complex set of influences that ran throughout the collection. Inspired by the ancient Chinese Confucian classic “Book of Rites—The Doctrine of the Mean,” the concept imbued the intricate pieces with an air of harmony.

During the show, the audio editing techniques used in music production were amazing.

There were audio clips of phrases including “nature,” “beauty” and “the world is family” that were mirrored on the garments in embroidery, emulating a sound frequency. A beautifully simple white color palette with pops of moss green was spotted on sweatshirts and chiffon skirts. For makeup, the same moss green accented the eyelids of the models.

The finale created a ceremonial parade of bright white tones that brought a sense of lightness to the runway. Through the use of natural plant fiber fabric and plant dying techniques, the designer hopes to demonstrate the sense of a return to nature through both the environment and society.

On the arena floor of Barclays Center in downtown Brooklyn, VFiles kicked off NYFW on Sept. 5 with a fantastic, futuristic runway show in partnership with Depop, Imagery and Media Alert. The community-sourced, sold-out extravaganza was designed to showcase emerging, global creators. Spring/Summer ’20 collections featured the winning designers, whose designs were intricately creative, sustainable and chic.

VFiles’ shop on Depop launched a limited edition merchandise capsule. There were vintage pieces popped with VFiles logos and t-shirt designs. Di Dou’s designs focused on power and femininity. Chinese-born, she takes her inspiration from both contemporary art and underground culture. In this collection, her materials were contrasted with hard futuristic materials, such as metal and 3D printed accessories. These pieces worked together with supple elements such as pastel silk chiffon, feathers and lightweight leather.

Pierre-Louis Auvray, also London-based, focused on where clothing and technology collide in his collection. The lines between synthetic and natural were blurred. He mixed the natural materials of wool knits with discarded plastic and electronic parts. The upcycled objects and clothes played with the ideas of nostalgia and sustainability. The detailing was outstanding.

Nico Verhagen is an Antwerp-based designer. His collection was influenced by the concepts of decay and rebirth. It examines the frail state of big cities. The clothes are created by combining urban motifs such as cracked paint, mold and rust with clean elements. Verhagen’s work includes sustainable and raw materials that include CO2 neutral linen, recycled nylons, reclaimed fabrics and exposed selvedge detailing.