MTA pushes back against asbestos reports 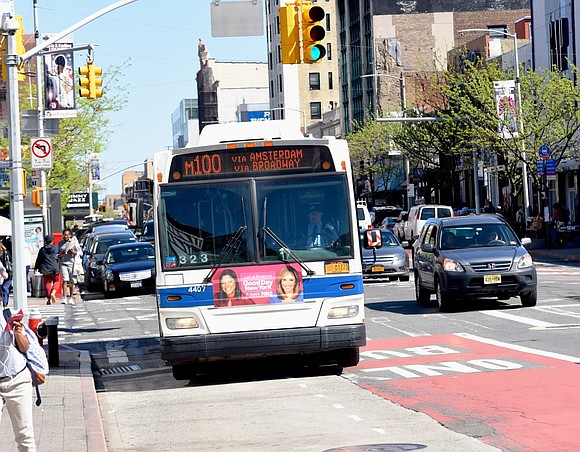 “We want all of the asbestos removed from the property and removed from transit facilities,” said Brooklyn Borough President Eric Adams during a Sept. 25 news conference in East New York. “It should be done in an expeditious fashion. We want to have air-quality tests around this depot.

“These members should not have to endure an environment that

Adams, New York City Council Member Rafael Espinal, Transport Workers Union Local 100 Secretary-Treasurer Earl Phillips and others held their news conference near the MTA Broadway Junction depot in East New York in response to reports that workers and interns are being exposed to asbestos-filled air in the facility.

On Sept. 23, the New York Daily News reported that nearly all the vents that pump air into the first three floors of the East New York depot were lined with cloth laced with asbestos. The cloths are designed to reduce the vibrations from the air vents in the 72-year-old structure.

Adams called for an independent investigation into asbestos contamination at the depot.

One-thousand people work at the bus depot including 700 bus operators, 120 maintenance workers, 50 dispatchers and 100 office workers. At least 20 high school interns may have been exposed to asbestos as well. According to MTA internal documents, in February, workers discovered asbestos in the depot while replacing equipment in the fan room.

Phillips said, “This problem should have been fixed many, many years ago. We are not in a fight with the transit authority, but we are going to ask them questions and pressure them to fix this situation here.”

During a committee meeting, New York City Transit Vice President of Office of System Safety Carl Hamann pushed back against the allegations.

“New York City Transit’s Office of System Safety and an expert third party environmental firm conducted a rigorous and comprehensive materials survey and air quality test for asbestos which confirmed no friable asbestos in the depot’s HVAC system, no detectable airborne asbestos, and accordingly no health risk to workers in the building. Claims to the contrary are false and irresponsible,” said Hamann. “The consultant conducted its air quality testing using strict standards, testing the area with the highest potential for airborne asbestos—inside the fan room. Out of an abundance of caution the part of the building served by one of the fan units was also tested. In both areas, there was no detectable airborne asbestos, and the air was deemed safe.”

It usually takes two to three decades between an individual breathing in asbestos fibers and being diagnosed with either mesothelioma or a chronic lung disease. According to the Daily News, the MTA took notice.

On Tuesday, it’s reported that MTA officials moved to shut down the ventilations in question (the MTA has denied doing any such thing). Hamann said the agency will do a better job of conveying management’s concern properly in the future.

“Safety is New York City Transit’s No. 1 priority, and we take this matter very seriously,” said Hamann. “While it has been deemed there is no risk of airborne asbestos from the fan plant, to assure no future safety issues arise an abatement plan for the remaining fabric is being developed, and all employees at the depot will be notified of that plan when it is fully developed.”