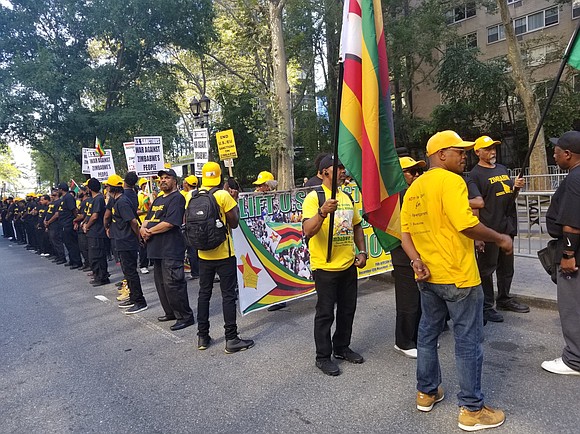 During the opening of the United Nations General Assembly this week the United States came under fire. “U.S. imperialist economic sanctions are weapons of war and must end now,” declared Viola Plummer, chair of the December 12th Movement International Secretariat, at a march and rally to lift the illegal U.S. sanctions on Zimbabwe, held in Dag Hammarskjold Plaza on Saturday, Sept. 21, 2019.

A counterprotest by Zimbabwe opposition The Movement for Democratic Change got rowdy at one point, but did not take away from the December 12th Movement’s position.

The Plaza was filled with protesters condemning U.S. economic sanctions in Zimbabwe and Puerto Rico which have a devastating impact on the people of both nations. “We are all here in unity and solidarity to expose the racist foreign policy of the U.S. which is rampant around the globe. In Zimbabwe, basic human needs including medicine and medical supplies, water purification systems, fuel, agricultural equipment and national infrastructure development have suffered due to severe illegal sanctions on international trade, loans and currency manipulations,” Plummer explained.

Puerto Rico, a U.S. colony referred to as a “territory,” crippled by the hurricanes and the effects of climate change, has been willfully neglected and denied adequate U.S. emergency management assistance. The island nation is recovering at a snail’s pace. The people resisted en masse and forced the resignation of the corrupt Gov. Ricardo Rossello in July. NYC protesters vowed to fight on.

“The U.S. imposed economic sanctions on Zimbabwe in 2001, in response to their land reclamation program which returned the vast lands stolen by a tiny sector of former British colonizers to the indigenous Zimbabweans. Further, the 2019 Summit of the 16 heads of state in the Southern African Development Community have condemned the illegal economic sanctions that have affected the entire region. The Summit declared Oct. 25, 2019, as the date on which SADC member states can collectively voice their disapproval of sanctions through various activities and platforms until the sanctions are lifted,”

The December 12th Movement has also conducted this campaign in Pan African unity. For more information call 718-398-1766 or visit D12M.com.