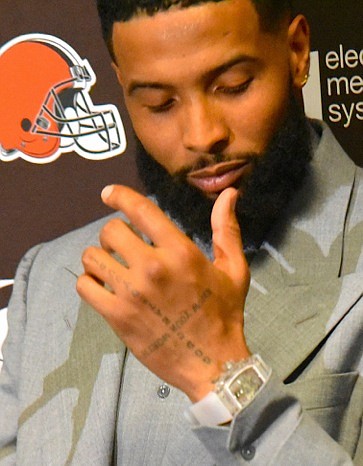 In sports, like other major subjects of interest, the back stories sometimes become as important as the game. Over the past few weeks, Odell Beckham’s insistence on wearing an expensive watch during football games became one of those topics.

Beckham and his Cleveland Brown teammates were the second team on the New York Jets’ 2019 season schedule, but his days of wearing a watch, one reportedly worth $200,000, another $2 million, on the field while playing were ceased by the NFL office.

That would’ve been the end of the story of a more than fabulous watch if Jet defenders hadn’t allowed Beckham on Monday night to catch a one-handed, 33-yard pass and turn a short yardage, first and ten pass from Cleveland’s 11-yard line into an 89-yard touchdown run, adding to the 16 points that they’d already totaled, and another L to the Jets’ loss column.

The only thing that the Jets have won thus far have been the coin tosses of Games 1 and 2. They travel this weekend, Week 3, to play the defending champions, the New England Patriots, who’ve recently bolstered their roster with the acquisition of world class receiver Antonio Brown.

The odds heavily favor the 2 and 0 Patriots, who’ve defeated the Pittsburgh Steelers 33-3 and the Miami Dolphins 43-zip to start their season.

Along with the Jets’ two losses has been the loss of their two quarterbacks, starter Sam Darnold, out due to mononucleosis after Game 1, and back-up Trevor Siemian who was crushed on Monday night, an ankle injury, by Cleveland defensemen. The Patriots will face Luke Falk on Sunday, a third string practice quarterback. He’ll start until Darnold returns which was announced this week by Jets head coach Adam Gase.

Not as contagious as some infections, like a common cold, mononucleosis, mono, is often called the kissing disease. It’s a virus that’s transmitted through saliva. It can be attained by kissing, through a cough or sneeze. It can also be transmitted by sharing a glass or food utensils with someone who already has it. It could take four to six weeks for Darnold to recover.

The Jets’ losses at quarterback are in addition to the loss of linebacker Avery Williamson, injured in August, preseason, a torn ACL, out for the entire season, and Quincy Enunwa, another neck injury attained by the running back during Game 1 against the Bills.

“It’s probably more about the 0-2 than the injuries,” noted Gase while discussing the mood of his team. “When you’re kind of in the heat of things, it’s hard to worry about things that you can’t control.”

In addition to the injuries, the Jets are dealing with suspensions that have also disabled their team. Tight end Chris Herndon, outside linebacker Brandon Copeland and defensive tackle Nathan Shepherd, all three suspended by the league.

Both Herndon and Copeland were suspended for four games. Shepherd six. Herndon for violating the NFL’s substance abuse policy. Copeland and Shepherd for violations of the league’s performance-enhancing drug policy.

With New England up next and their mounted problems on and off the field, the Jets will receive some relief in Week 4. An early bye week for them to reorganize and make adjustments for the second quarter of the season. Like Beckham’s watches, the Jets will get some time, but that’s just some of what they need.