Amid the devastation in Abaco, Bahamas, the conversation turns to ‘Illegal Immigration’ 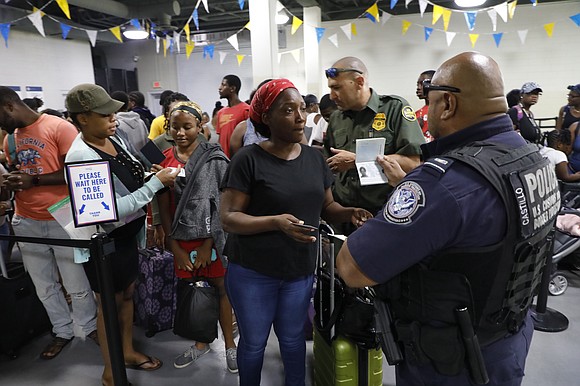 U.S. Customs and Border Protection processing the arrivals of passengers evacuating from the Bahamas in the Port of Palm Beach, Fla. CBP photo by Jaime Rodriguez Sr

It’s hard for many to imagine that illegal immigration is also a problem for some Caribbean nations, including the hurricane devastated northwestern Bahamas.

Many see it as mainly a U.S. or European dilemma. But, unfortunately, in the largely Black and Brown region of the Caribbean, the same sort of xenophobic sentiments expressed by some Americans toward immigrants here in the U.S. also exists in many regional countries.

In the midst of the catastrophic Hurricane Dorian, which unleashed its category 5 strength on Abaco and Grand Bahama islands in The Bahamas, the conversation has quietly turned to the hot button issue of illegal immigration on the island.

Why? Because Abaco was home to many Haitian immigrants, some undocumented, who lived in the Haitian shantytowns called The Mudd and Pigeon Peas in Great Abaco Island’s Marsh Harbor area. It is unclear how many were undocumented.

What is known according to data compiled by W.J. Fielding, et al., from 2005 for The Stigma of Being “Haitian” in The Bahamas from The College of The Bahamas Research Journal, is that Haitians represented conservatively 16.9% of the population on Abaco while Haitian children accounted for some 31.3% of those enrolled in schools on the island. Overall, they represent about 80,000 of the 350,000 people across The Bahamas.

As Dorian receded from the island Tuesday, Sept. 3, and the reality of the widespread devastation came to the view of the world, it became quickly obvious that the shantytowns many of these Haitians called home, far away from the flashy tourist resorts, had completely disappeared.

Nassau Guardian reporters on the ground on Abaco reported seeing several dead bodies in The Mudd area even as shell shocked residents like Haitian born Aliana Alexis, stood grief stricken on the concrete slab of what was left of her home, arms outstretched, head raised to heaven as if asking silently: “Why me God?”

Geoffrey Farquharson, who practices law in Nassau, told the Catholic Diocese newspaper in Miami that the settlements were built illegally on waste ground because nobody had good use for that land. “When the hurricane came it was obliterated—many there were completely off-the-grid persons living in the shadows with no passport or papers,” he was quoted as saying.

Haitian Charge d’Affaires in the Bahamas, Dorval Darlier, brought the issue of illegal immigration more into the spotlight on Sept. 5, outside the National Emergency Management Agency headquarters in Nassau, Bahamas. There to offer his country’s help to get supplies to Haitians in Abaco desperate for help, he urged many fellow Haitians who are in the country “illegally” to call the consulate for help and not be concerned with fears of deportation.

“It is not about fear right now. …These people, they are here. It is not about who is legal or illegal. It is about helping people,” he was quoted as saying in the Nassau Guardian.

But Darlier’s most profound statements followed: “The tragedy transcends issues of nationality and origin in the aftermath of Hurricane Dorian,” he stated. “It’s not about Bahamian. It’s not about Haitian. It’s not about the flag color, as the prime minister said. It’s all about helping.”

Darlier is right. In a country where the attitude of many, including the government, has been hardening toward Haitians and especially those undocumented in recent years, one can only pray that all storm victims, legal or not, will receive the same level of support and help that transcends nationality and status.

And most of all that the government of the Bahamas, may find it prudent in the weeks and months to come, to grant the undocumented Caribbean brothers and sisters among them, some sort of pathway to earned legalization. After all, we are supposedly One Caribbean aren’t we?