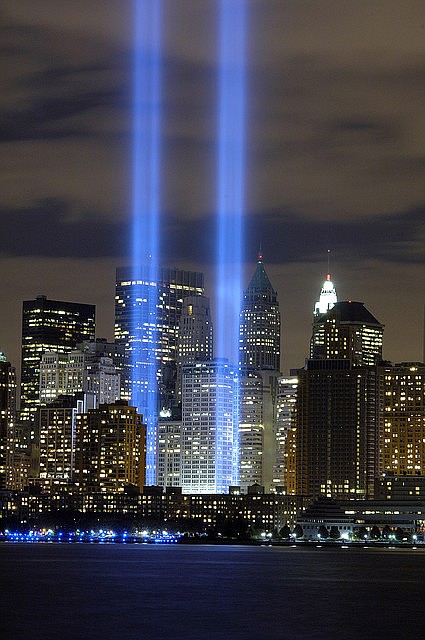 In September 2001, I was nine months pregnant and working at the Black family-owned Daily Challenge newspaper. For weeks we had been doing stories about the city eagerly anticipating saying "Hasta la vista" to an increasingly unpopular Mayor Rudolph Giuliani.

On Sept. 10, 2001, Giuliani was persona non grata. His draconian policies had alienated the people of Gotham. The city unions were mad at him. The teachers, police, social service workers, vendors and the general Black community were tired of his blanket defense of cops who shot and killed young Blacks, and their ramped-up harassment in the inner city.

The tabloids were having a field day.

What happened on Sept. 11 saw the reinvention of that unpopular mayor. Hmm.

I was watching Jim Ryan on his morning news show, announce that one tower was on fire. Didn't know why. Then a plane flew into the other tower on live TV.

This was an attack.

As the day went on, the full horror became apparent.

We didn't know what to think.

The numbers. The collapse. The fires. The smoke. The devastation. The fear.

And all the time, I wasn't believing the spin. Just didn't. Still don't-but that's another conversation for another time. Perhaps.

But the pain of seeing all the loss was almost debilitating. Three thousand people lost.

With an unborn baby on board, I didn't want to go down to Ground Zero. I knew so many activists, firefighters and retired cops who had gone down there. They shared their stories and they were heartbreaking.

I saw my midwife a few days later and she was still in shock. Her husband was an inspector down at the Fulton Street Fish Market. When he walked into the house on the evening of 9/11, she told him, "Get out of the house with all of those dead people on your shoes."

"What do you mean?" I asked, as her eyes filled up again.

"The people. The people were incinerated."

You know what? Big ceremonies and news specials notwithstanding, I don't think the city has really recovered from that gruesome assault.

The federal government has certainly seen a wondrous transformation in the last decade in terms of its far-reaching powers.

Is there in-depth, post-analysis analysis on the effects of the Patriot Act and the diverse agencies of Homeland Security and their "counter-terrorism" policies?

And then there are the wars. All the thousands of deaths and destruction? Does fighting in Afghanistan and Iraq make people less likely to even question an assault on, say, Libya? Nine Eleven changed the world. It began a new order.

The post-9/11 lexicon is so much more polarizing than prior. At home and in the community are where we should be addressing the question of how do you make critical thinkers of a generation born and growing up in these 2000s?

We are all still healing, still growing and hopefully still evolving into our best selves.