A Joyful Launch Party for ‘Following In Her Father’s Footsteps’ 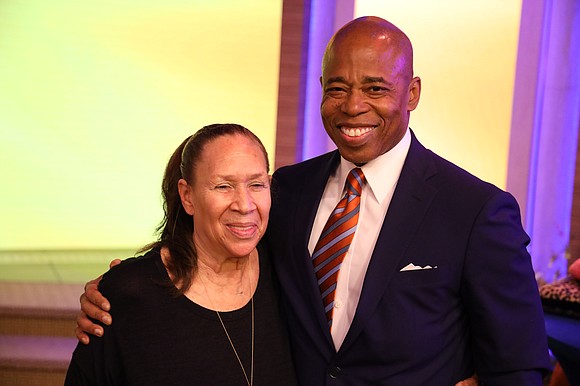 The “Live with Kelly and Ryan” studio was packed with celebrants last Thursday at a reception for the launch of “Following in Her Father’s Footsteps,” a beautifully illustrated book for 8-12 year-olds. Delighted children in attendance were excited by the event, studio and projections of the book’s cover surrounding the room. Conceived by Andrea Cooper Andrews, written by Maitefa Angaza and illustrated by Eula Baek, the book celebrates 29 women of all ages who are philanthropists, activists, film and television stars, and accomplished in media, music, business, education, politics and sports. All were powerfully inspired by their fathers or father figures, and are illustrated alongside them in vivid color and spirited style.

Some of the women featured in the book were in attendance and were presented with the Speak Truth to Power Award by the Andrew W. Cooper Young Journalists in Training program (YJIT) at St. Francis College in Brooklyn. Elinor Tatum, publisher of The Amsterdam News took the reigns from her father Bill Tatum. Tamron Hall, executive producer and host of WABC-TV’s “Tamron Hall” show, was inspired by her military dad Clarence Newton. Author and professor Ilyasah Shabazz is the daughter of Malcolm X; Keisha Sutton-James is a business developer and granddaughter of attorney/media mogul Percy Sutton. Young painter Jessica Jackson is the granddaughter of the Rev. Jesse Jackson. They were presented with enlarged and framed copies of their pages.

Also honored were Hasna Muhammad, writer/photographer and daughter of Ossie Davis and HaJ, a producer and comedienne. Sandra Bookman, host of WABC-TV’s “Here and Now” and an Eyewitness News anchor and reporter, was the emcee for the evening and Tamron Hall served as the evening’s host. President and general manager Debra O’Connell and executives Scott Simensky, Art Moore and Marilu Galvez were given framed copies of the book’s cover in recognition of the station’s sponsorship of the event. The station also purchased copies of the book to be given to all in attendance.

Brooklyn Borough President Eric Adams told everyone about Andy Cooper’s legacy and the inspiring influence Cooper had on him personally. Monique Moore Pryor, Esq., chief of staff for St. Francis College President Miguel Martinez-Saenz, made remarks, as did the YJIT board members.

Andrea Cooper Andrews offers this project as a tribute to her own father, Andrew W. Cooper, founder/publisher of The City Sun newspaper. She noted at the event that “Following in Her Father’s Footsteps” is dedicated to Frank J. Macchiarola, former president of St. Francis College, and a longtime friend of her father’s who provided YJIT a home at the college in his honor.

“Following in Her Father’s Footsteps” is available for purchase at www.followinginherfathersfootsteps.com.