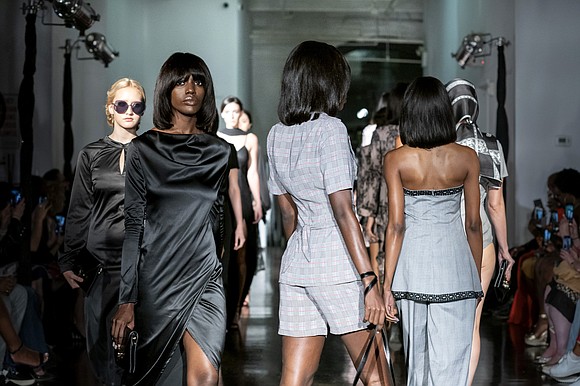 It was a September to remember in fashion. Having the shows in the outer boroughs brought out the best presentations from all of the designers. The magic created by these two African American designers was mesmerizing at NYFW. Negris LeBrum launched their Black Berry collection and Pyer Moss opened up his looks with nostalgic cues. The professional models and entertainers in these shows worked the runway!

This season, the Negris LeBrum brand’s Black Berry Collection represented the inclusion and cultural history of Negris LeBrum. The term “Black Berry” is a southern expression that’s often used to describe the beauty of a Black woman or man. The foundation of the brand has always been rooted in the romantic Negris love story. This collection was pretty tailored. Striped patterns in suits and dresses were sassy, yet sophisticated.

At the King Theatre in Brooklyn, designer Pyer Moss presented a show-stopping fashion presentation that not only starred the designer’s incredible spring/summer 2020 collection but the fabulous Pyer Moss Tabernacle Drip Choir. The show was dedicated to Rock and Roll entertainers like Chuck Berry, Little Richard and Jimi Hendrix. The music was uplifting, and the show hit the top of the fashion charts!

The Pyer Moss project began as an experiment to reinterpret nostalgic cues from the designer’s childhood. The classic athletic gear and sports uniforms from his youth inspired the looks. Although he didn’t participate in certain sports, he admired his favorite team’s uniforms and subsequent collections focused on sci-fi movies, educational textbooks and hip-hop focused brands from the ’90s that he also admired. For spring/summer ’20, he re-captured all of the nostalgic concepts. One model came down the runway in a multitoned pantsuit that reminded the audience of characters from the first “Shaft” movie. Some of Bob Marley’s modes moved down the runway as well.

In details, the designer enhanced garments with contrast-color piping, and draping and unexpected surprises along with other opulent cues. The looks offered a 1950s to 1970s style. Often, there was traditional clothing that represented certain themes, yet his clothes were refined with a fit for today’s daily use. Military influences were noticed in the collection. To boot, his pretty printed, pointy-toe/skinny heel boot was the best thigh-high stepper on the runways.

Pyer Moss has evolved from a brand that focused on nostalgic themes to a line that boasts current social commentary. The designer describes the brand as an “art project” or “a timely social experiment” at times. Pyer Moss continues to redefine itself every season with collections that aim to provoke thought, combine storytelling, activism, debate, theater and social commentary all while collaborating with other artists including Erykah Badu, Usher, Gregory Siff, Maurice Scarlett, Driely Viera, Vic Mensa, Kari Faux and more.

The Pyer Moss collections are produced in Italy and New York City. Since its debut, Pyer Moss has amassed huge, international support from most of the global press outlets. Pyer Moss is sold limitedly at exclusive high-end boutiques worldwide. Kerby Jean-Raymond has been featured on the Forbes 30-under-30 list, Elle’s 7 Most Wanted Designer’s list, Crain’s 40-Under-40 list. He has won the ADC Young Guns Award, the FGI Rising Star Award, Ebony’s Future 15 Award and more.