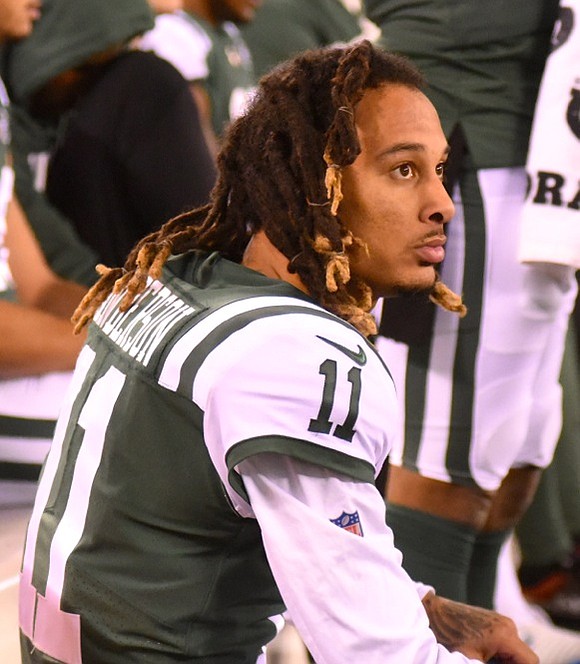 Each week during the NFL season, there is a signature game that impresses fans, trends in the media and receives the biggest headlines. This week, the Cowboys’ loss to New England on Sunday threatened to overshadow all of the shine that the New York Jets deserved for their impressive 34-3 defeat over the Oakland Raiders. It was the Jets’ third straight 34-point win, and a continuation of their first win streak this season.

The Jets beat a good Raiders team that came to New York with a 6 and 4 record, but left 6 and 5. The Jets played a complete game on offense, defense, and on special teams, ending Oakland’s three game win streak.

“That was a big point of emphasis this week. We talked about it as a group,” noted Jets head coach Adam Gase regarding his team’s game plan to defend against the Raiders.

“We knew what we were dealing with as far as their offense, which meant our offense had to do a good job staying on the field, putting ourselves in good position on third down if it got to that point.”

Quarterback Sam Darnold led their offense connecting on 20 of 29 attempts for 315 yards with touchdown throws to receiver Robby Anderson and tight end Ryan Griffin. There were also key throws to running back LeVeon Bell and receiver Braxton Berrios in addition to Anderson.

Bell made one of his most spectacular catches of the season, a 23-yarder with a defender tightly on him. Berrios, who also returns kicks, out-ran his defenders on a 69-yard catch and run before being pushed out of bounds on the 1-yard line.

The defense was also aggressive. Cornerback Brian Poole returned an interception 15 yards for a touchdown. The first of his career.

“Guys are playing well. We didn’t turn the ball over. Got a couple turnovers. Got some hits on the quarterback. Offensive line doing well. I can’t complain,” an overall observation by Bell. “We’re playing good football right now.”

With a trip to Cincinnati this weekend to play the winless Bengals on Sunday, and hosting the 2 and 9 Miami Dolphins the following Sunday, the Jets are feeling their momentum.

“It’s good momentum,” noted Anderson. “Regardless of who it’s against, we need to win, but you know, it feels good to come out and put up a win like that against a very good team.”