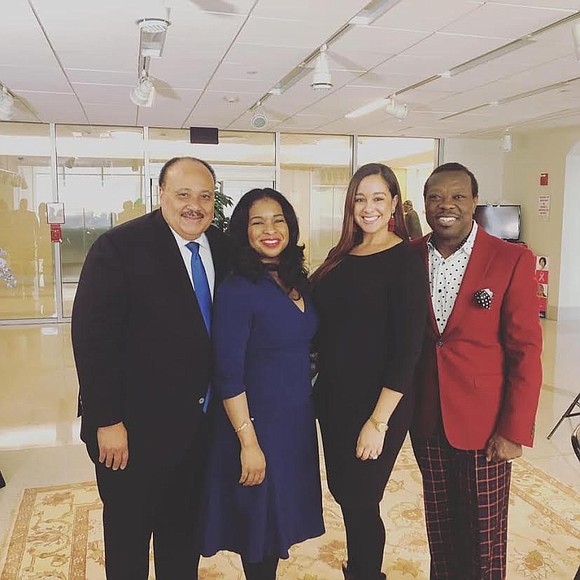 During a brief visit last week, the oldest son of civil rights activists Dr. Martin Luther King Jr. and Coretta Scott King navigated throughout Harlem and walked these streets in anonymity while making his rounds to various locations. Martin Luther King III came into town to attend a minister’s conference and while here he also was video-recorded during an interview for the sequel to “The Day Harlem Saved Dr. King” documentary. Simultaneously, he provided a support letter for the landmarking of some prestigious Harlem property after his famous father.

On Friday, Nov. 15, he visited Zoe Ministries at 310 Riverside Dr. and 104th St. at 10 a.m. to pow wow with the clergy there. Then, an hour later, headed to Sylvia’s Restaurant at 328 Malcolm X Blvd. for some soul food, prior to stopping by Harlem Hospital’s Dr. Martin Luther King Jr. Pavilion at 506 Malcolm X Blvd. and 135th St. at 12:15 p.m. for the video-recording, before heading to the airport to catch his flight back to Atlanta.

On September 20, 1958 a 29-year-old Dr. King Jr. was stabbed with a steel letter-opener by a 43-year-old African American woman named Izola Curry during a presentation of his book “Stride Towards Freedom” at Harlem’s Blumstein department store at 230 West 125th St. He was rushed to Harlem Hospital with the metal object protruding from his chest, where doctors surgically removed it, very delicately.

At Harlem Hospital, King III came in contact with the second generation of several relevant people associated with the stabbing incident, from the sons of the chief surgeon who operated on King Jr., and of one of the cops who assisted Dr. King to Harlem Hospital, as well as the daughter of the initial owner of Blumstein’s. Several offspring of the Wadleigh JHS students who were present during a field trip when the 1958 stabbing occurred were also supposed to be there, but did not show up.

“He said he had heard and was actually disappointed that he couldn’t meet with the Wadleigh students of 2019,” explained brother Juluis Tajiddin who is co-spearheading the landmarking campaign. “He said somehow he was going to make it to them.”

King III was in full support of the preservation effort for his father. “There were a cluster of buildings where King Jr. was operated on. The building that he was actually operated on has since been demolished, but there’s still remains of the buildings from the same complex,” Tajiddin explained. “We still want to have a connection to that history because he agreed that it was very relevant to preserving history.”

King III said he learned a lot about the incident which he previously didn’t know because he was only 1 year old when it happened, although he has heard the story recounted by family many times.

When asked if he forgave Ms. Curry for her actions, he responded, “Well he didn’t die as a result of it. He healed from it, and we were taught to forgive her because my father forgave her. It’s something that we’re not going to forget, but there’s no need to harbor any grudge because that’s not how he died.”