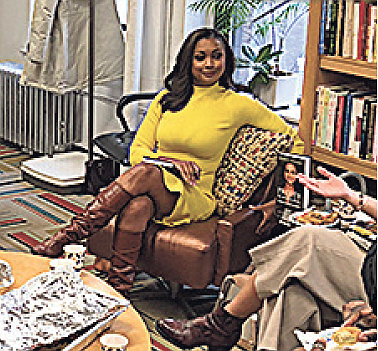 Eboni K. Williams, current co-host of REVOLT TV’s “State of the Culture,” teamed up with the not-for-profit organization, Dress For Success and their Going Places Network to discuss the meaning behind “Pretty Powerful.”

Dress For Success’ Going Places Network helps its unemployed and underemployed clients build qualifications and networking opportunities for job searches, through consistent weekly training and one-on-one coaching. A major component of the organization is creating a supportive environment for every woman involved.

Williams’ published book, ‘Pretty Powerful: Appearance, Substance and Success” brought up a lot of conversation, as it promotes women being themselves unapologetically and freeing themselves from societal rules enforced by patriarchy. Williams refers not only back to her childhood for why she lives with intention, but also back to her days facing sexism at FOX News, as she was referred to as “Barbie.”

One of the key words in the discussion with the Dress For Success clients was intention. “I am very intentionally using my privilege for power,” stated Williams. “What I can do is position myself accordingly so I can deconstruct the systems and, in the meantime, empower my sisters and make space for them. That’s the work of my life.”

In this society—for generations—women are always taught that they have to be one way. They are taught that they cannot like getting dolled up and also be intelligent. If done this way, they will not be taken seriously. As quoted from the book, “Some of this is biological...women are the standard bearers of beauty, so to speak. That doesn’t mean that we shouldn’t try to rise above it though.”

Growing up, from the time she could read, Williams’ mom gave her books to read about Black people in America, and in history, and she learned “how they came to be here in a way that felt so heavy.” The books and stories that she read as a young child were the autobiography of Frederick Douglass, the history of Eldridge Cleaver, the stories of Sojourner Truth and more. She stressed the fact that she received these books as well as also receiving dolls such as Cabbage Patch Kids.

Because of this upbringing, she had an awareness of who she was at a young age, refused to allow the world to tell her who she was, who she is now, and encourages us to instill this in our daughters growing up. “If you’re walking into Chase Bank, you better know who you are. If you’re walking into New York Public Library, you better know who you are. This is important to start teaching our girls right now. They’ve got to know who they are, they have to be committed to understanding the process as young women, because this world will lie to them.”