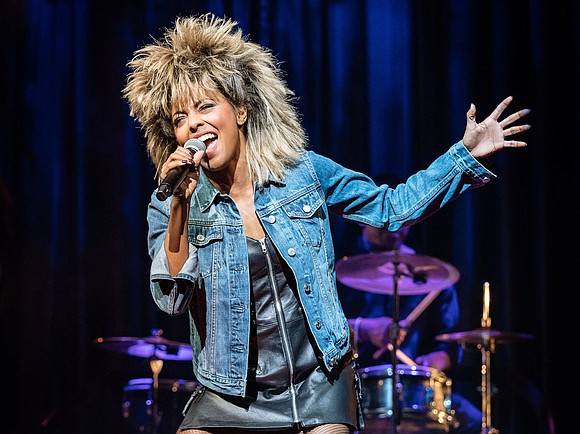 “Tina” is a solid hit! Writer Katori Hall, with Frank Ketelaar and Kees Prins, has created a musical theater masterpiece. Adrienne Warren is a singing POWERHOUSE. She will raise your spirits and give you chills!

Between the book by Hall, Ketelaan and Prins and the musical supervision, arrangements, additional music and conducting by Nicholas Skilbeck, set and costumes by Mark Thompson, choreography by Anthony Van Laast and direction by Phyllida Lloyd, “Tina” is a Broadway phenomenon! You get to see her story, listen to a Billboard list of her songs, see the dance moves she and her dancers are known for, and hear an inspiring story that proves that no matter your adversities in life, you can be somebody. Tina Turner proves that if you have a gift and a few people believe in you, you may have some devastating times but, despite your adversities, including being a domestic violence survivor, you can come out on top.

“Tina” lets the audience see a much more intimate side to this musical legend and learn about her issues with Ike, the abuse she suffered, and also about her relationships with her two sons by different fathers, and her struggles to find her own sound and to fend off the repo man. You get a closer look at the odd, damaged relationship she had with her mother and feel the catharsis as she transforms from Anna-Mae Bullock to Tina Turner, to wife of Ike Turner and lead singer, to Tina Turner the

Going to see “Tina” is having the best of all worlds: it is a spectacular Broadway musical, but also an amazing concert experience. By the end you are on your feet and singing “Proud Mary” as Warren turns the microphone to you.

Warren originated the role of Tina at London’s West End and earned 2019 Olivier, Evening Standard and Joe Allen Award nominations. She was also nominated for a Tony for her 2016 performance in “Shuffle Along.” But I knew she was familiar to me for something else, and then I saw it—she starred in “Bring It On: The Musical” on Broadway. Warren embodies Tina Turner to the max and, most importantly, sounds just like her, which is what truly gives this production a jarring authenticity.

Hall is not only the lead book writer but a co-producer of the musical. It is absolutely captivating to see how she logically interweaves Tina Turner’s songs into the engaging storyline. (It’s also incredible to note that this is her first musical!) Well, Hall definitely has a solid hit here. And that doesn’t surprise me at all. I mean, did you see “The Mountaintop” on Broadway? Need I say more? This sister knows what to say and how to say it!

While Warren channels Tina, Skye Dakota Turner, who is making her Broadway debut as Young Anna-Mae, also proves to be a force to be reckoned with. I mean, this little girl can S-I-N-G! And she has great stage presence.

“Tina” is an evening of classic songs including “Nutbush City Limits,” “Shake a Tailfeather,” “It’s Gonna Work Out Fine,” “A Fool in Love,” “Better Be Good To Me,” “I Want to Take You Higher,” “River Deep-Mountain High,” “Proud Mary,” “I Don’t Wanna Fight No More,” “Private Dancer,” “I Can’t Stand the Rain,” “What’s Love Got to Do With It,” “We Don’t Need Another Hero” and “(Simply) The Best.” And believe me, by the time you hear “(Simply) The Best” there is no doubt in your mind that those words describe Warren and the entire experience of witnessing “Tina.”

Warren is on stage with an amazing cast that includes Daniel J. Watts as Ike; Dawnn Lewis as Zelma, her mother; Mars Rucker as her older sister Alline; and Myra Lucretia Taylor as her grandmother, Gran Georgeanna, and her childhood caregiver. The connection between Warren and Taylor is palpable and the heartbreak severely felt as they sing “Don’t Turn Around” when she sends Tina from Memphis to St. Louis to live with her mother and sister and have an opportunity to do something with her vocal gift.

“Tina” also has a great ensemble cast and, with those dance moves by Van Laast, I don’t know when they had a chance to catch their breath. Wow! After seeing “Tina” you realize “We Don’t Need Another Hero” because she’s already here! “Tina” is playing at the Lunt-Fontanne Theatre on West 46th Street. For tickets, go to