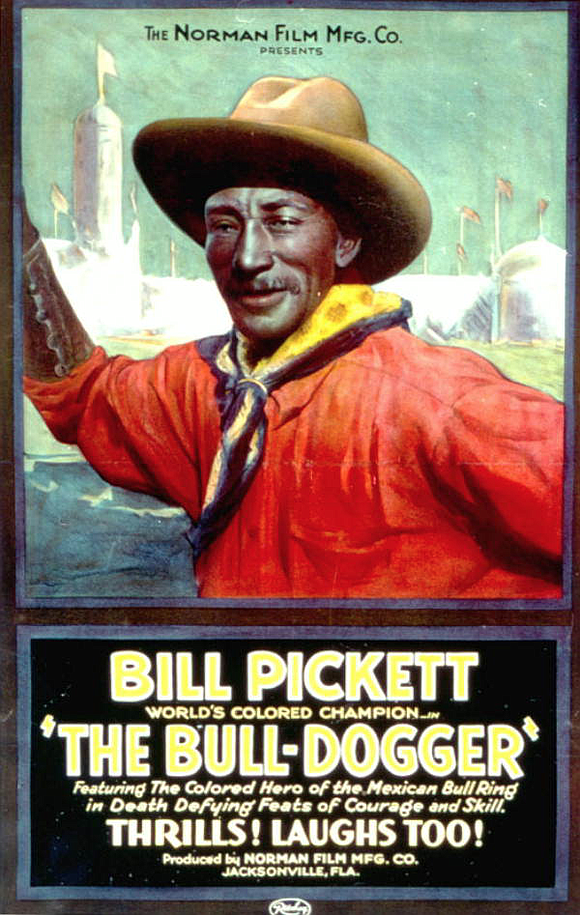 Two weeks ago I featured Sarah Jane Woodson Early in this column, a profile prompted by the arrival of Williams Loren Katz’s “The Black West,” the sixth edition of the classic. On another page in the paper there’s an obituary of Bill, who joined the ancestors at age 92 Oct. 25. This week I highlight the life and times of rodeo immortal Bill Pickett, who, like Mrs. Early, is among the Black pioneers cited by the late historian.

In the “Introduction to The Black West,” Bill recalls a conversation he had with the great poet Langston Hughes. Bill sought out Hughes requesting permission to use one of his quotes for his book “Eyewitness,” to which Hughes gladly consented. “Don’t leave out the Black cowboys,” Hughes told Bill, and this he obeyed with gusto and practically with unprecedented detail.

There are a number of notable Black cowboys to choose from in Bill’s book, but selecting Pickett was aided by the Google meme of the day with a man riding a horse with a lasso looping over his head. It was commemorating the birthday of Will Rogers, born Nov. 4, the rodeo performer and later popular storyteller and Hollywood star. At one time he was as a member of the 101 Ranch Wild West Show and shared the spotlight with Pickett.

“Zack Miller, owner of the huge sprawling 101 Ranch in Oklahoma, described Bill Pickett as ‘the greatest sweat and dirt cowhand that ever lived—bar none,’” Katz wrote. “But Pickett was far more. He invented bulldogging, the most famous rodeo sport and the only one of the eight rodeo sports credited to an individual.”

Bulldogging, Katz explained, involved riding one’s horse after a steer and then leaping out the saddle to grab the steer’s horn with a hand. After accomplishing this dangerous feat, the rider digs his boot heels into the ground, flips the huge beast by pulling its head upward and holds on until they both came to a halt. “Pickett not only did this with relative ease,” Katz continued, “but also completed his daring act with a flourish: he sank his teeth into the steer’s upper lip and then raised his hands to show that his only grip was teeth to lip.” He learned this trick after witnessing a bulldog leap on a steer and bite its upper lip, rendering the steer helpless and compliant.

Pickett was born on Dec. 5, 1870, in Texas to poor Black Cherokees. The second of 13 children, Bill left school after the fifth grade to become a ranch hand. He learned to ride and to watch the long horn cattle.

It was perhaps during his youth that he observed bulldogs chasing and subduing steers by biting their upper lips.

This was just one of several tricks Pickett perfected and later—with his four brothers—established as The Pickett Brothers Bronco Busters and Rough Riders Association. In 1890 he married Maggie Turner and they had nine children. Katz noted that Pickett signed with the 101 Ranch Wild West Show in 1907 where Rogers and cowboy movie star Tom Mix were among the troupe’s performers. They staged shows all over the west, South America and Canada, and even spent several months in Europe in 1914 where Pickett picked up a smattering of German.

Katz described how Pickett, a muscular 5-foot-7, and 145 pounds, could wrestle a steer to the ground. Not only was he a star attraction as a bulldogger, Pickett once rode a powerful elk, avoiding the sharp antlers until the elk tired. According to Katz, Pickett was also credited with throwing a buffalo bull. During one performance at Madison Square Garden, Pickett and Rogers had to ride into the stands in order to corral a steer that had been terrified by the bright lights.

Much of Pickett’s derring-do was not without pain and injury, and over time just about every bone in his body had been broken. Even so, he rode on, earning the title as the greatest bronc buster and bulldogger of all time.

Ironically, it was not while bringing down a raging bull or breaking a wild bronc that he was ultimately injured, but slipping in a barn where a stallion kicked him in the head. He died from this injury in 1932.

In 1971, a generation after his death, Pickett became the first African American voted into Oklahoma City’s Cowboy Hall of Fame. A bronze statue of him astride a horse was mounted outside the Fort Worth Cowtown Coliseum in 1987; the event officiated by screen star Woody Strode.

“Pickett mastered the ferocious in nature not with weapons of death, but with a craftsmanship rooted in respect for life,” Katz observed. Thousands all over the globe witnessed Pickett’s action-packed feats, which offered fans a semblance of courage, and stamina to overcome the large, often dangerous animals.

On YouTube there is a film clip of Pickett roping a steer in 1921 and of him and others wrestling a steer to the ground. And—far less exciting—Pickett’s image is on a United States postal stamp.