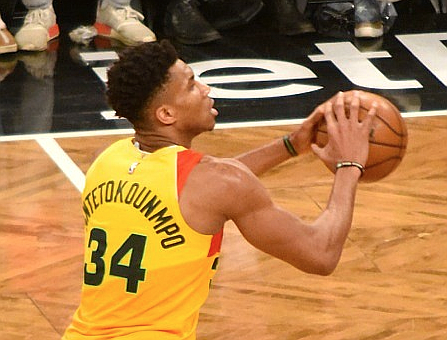 On June 24 in Los Angeles, when the NBA holds its 3rd annual awards show, the Milwaukee Bucks’ Giannis Antetokounmpo should be honored as the 2019 regular season most valuable player.

Proponents—some obsessively—of analytics fawn over James Harden, who is the poster child for the theory that today’s game should consist of a high number of three point shots, which they view as much more statistically efficient than mid-range shots.

Since being traded to the Houston Rockets from the Oklahoma City Thunder in October of 2012, Harden’s three-point field goal attempts have increased from 4.7 per game—his 2011-12 number in his final season with OKC—to 13.2 this past season. On Monday night versus the Golden State Warriors in Game 4 of the teams’ Western Conference Semifinals matchup, Harden shot 17 of the Rockets’ 50 three pointers, making only six.

While it should be inarguable that Harden is a tremendous individual offensive talent and had eye-popping regular season averages of 36.1 points (best in the league), 7.5 assists and 6.6 rebounds, MVP worthy numbers after winning the award last season, the numbers that matter most are 60-22 and 3-1. The former being the Milwaukee Bucks’ NBA best regular season record and the latter the series lead they held over the Boston Celtics in their Eastern Conference Semifinals pairing with the Bucks looking to close out the best-of-seven series last night (May 8) at home.


Antetokounmpo is the reason the Bucks have gone from being the East’s seventh seed a year ago with a record of 44-38 to the No. 1 seed. Under head coach Mike Budenholzer, who is in his first season directing the Bucks after five years as the head coach of the Atlanta Hawks and before that serving as an assistant coach for San Antonio Spurs from 1996 to 2013, the aptly nicknamed Greek Freak has blossomed into one of the NBA’s legitimate superstars. He is the franchise’s best player since Kareem Abdul-Jabbar (formerly Lew Alcindor).

And he has done so dispelling the analytic premise that the mid-range game is obsolete and illogical. Additionally, the 6-foot-11 Antetokounmpo is likely to be named NBA All-Defensive First Team following his All-Defensive Second Team selection last season.

The 24-year-old forward, who was born in Athens, Greece to Nigerian parents who immigrated to the southeastern European country, has done most of his scoring inside the three-point line. In five seasons in the NBA, all with the Bucks, who drafted him with the 15th overall pick in the 2013 draft, Antetokounmpo has averaged just 1.7 three-point attempts per game and 0.5 made. Yet his impact on the Bucks has qualitatively been equal to Harden’s on the Rockets.

He finished the regular season with averages of 27.7 points per game (3rd in the NBA), 5.9 assists and 12.5 rebounds. Antetokounmpo’s 2019 post-season play has been just as good. In eight games played prior to last night, which includes the Bucks’ 4-0 sweep over the Detroit Pistons in the opening round, he had averages of 28.4 points and 11.8 rebounds while playing typically stellar defense.