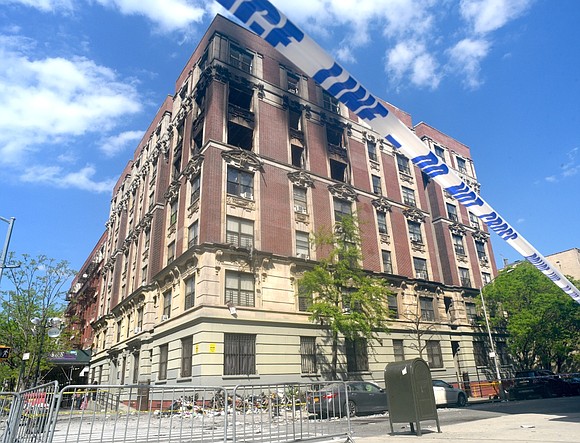 Click here to donate to the GoFundMe to help the family.

Awoken by the crackling of flames, breaking glass and piercing screams were stunned Harlemites on Adam Clayton Powell Boulevard, on the corner of 143rd Street, at about 1:40 a.m. on Wednesday, May 8, 2019. Veteran firefighters were horrified when they found the bodies of six family members, including four children, in a backroom of the fifth floor in the Frederick E. Samuel Apartments at 2441 Adam Clayton Powell Jr. Blvd.

When firefighters reached the two rear bedrooms, they found six bodies, four children and two adults. The fire took an hour and 100 firefighters to get under control.

“We are in the business of saving lives and in this instance we were not able to. It is very difficult to deal with this loss and our hearts are with the friends and family of the deceased,” said FDNY Commissioner Daniel Nigro.

The victims have been identified as Andrea Pollidore, 45, her four children—two girls, ages 11 and 6, and two boys, ages 8 and 3—and a 33-year-old man believed to be the woman’s stepson.

With neighbors and friends of the family openly weeping as they looked up at the burnt shell of two floors, a memorial was set up.

Speaking to the press Mayor Bill de Blasio said, “It is a very painful day for our city. This is a horrible loss and we woke up this morning and heard about the unspeakable—a whole family, and I want to say as a father, hearing that four children were lost in a single family is just extraordinarily painful. Two adults, four children—this is a gut-wrenching moment for all of us. There’s a full investigation underway…At this point, all signs point to simply a horrible, terrible accident, but we will go through the full investigation to get all the facts.”

As he thanked the FDNY “for their bravery,” the mayor added, “We need to be there for the surviving members of the family, all of us as New Yorkers are feeling this tragedy together.”

Fire Commissioner Nigro said, “Preliminarily, we believe the fire was an accident and that it started in the kitchen, on the stove, quickly extended out of the kitchen, and eventually involved every room in this apartment, including the two rooms where the victims were found. It’s a difficult operation for the Department, we’re in the life-saving business and we take this very personally when we’re unable to save this family.”

At the scene as day broke was Jean Belot, mourning his 4-year-old son Elijah, the youngest child to perish. “I am not in a good state of mind,” the devastated father said.

Raven Reyes, one of the eldest of Pollidore’s children, said that the whole family is in shock. She was not in the apartment, and was trying to come to terms with the tragic news. She praised her mother’s spirit and called her siblings, “perfect. They were amazing.”

A memorial was planned for Wednesday evening at press time.