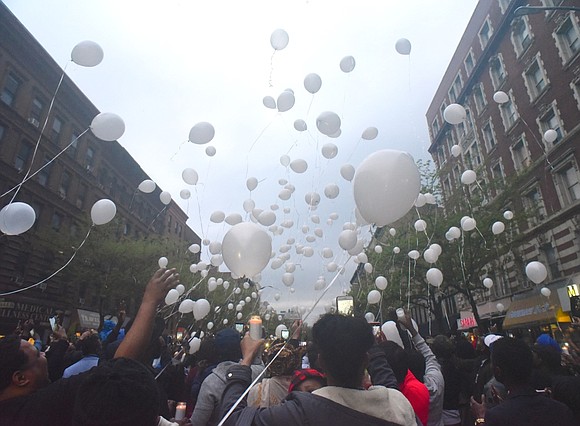 “Repose en Paix Bams” was wailed in the streets of Harlem and the Bronx; and written all over social media when news broke Tuesday, April 30 that popular photographer and community activist Oumar Bamoye ‘Bams’ Deme had died in a car accident on the Bamako-Ouagadougou Road (Mali, Burkina Faso).

Many people—particularly members of the French-speaking African community along Harlem’s 116th Street—collapsed in tears.

A hugely popular figure, the dynamic photographer, photojournalist, barber and cultural ambassador garnered a huge following from across the waters.

“I want to build with my community,” Bams told the Amsterdam News as he shot many a cultural, political, religious and community gathering—he was often on hand to photograph influential people, sporting events, rallies and celebrations. His love was the young people “showing them the right way, and helping them grow,” said the multi-lingual cultural ambassador to Cote d’Ivoire, New York, Paris, Abidjan and Bamako.

He studied at the New York Film Academy and was dedicated to perfecting his craft.

He worked with artist and entrepreneur Akon, and exercised his ability to engage and inspire people both in Africa and in America.

“RIP my brother Bamz,” Akon said on Facebook. “May God reserve a VIP spot for you in Heaven. Your beautiful spirit will be missed.”

Upon hearing the news many instant tributes and events were held for him in the mosques masjid in Harlem, and back home. One such memorial was the “Sleep in Peace Bams” candlelight and balloon release vigil held at the Sénégalais d’Amérique on 116th Street, Harlem. With very short notice hundreds of people crammed the small space, with friends, family members, and folk who just respected his legacy to his international community. His family and his mother addressed the standing-room-only room via a FaceTime video call from Mali. Speaker after speaker praised him as a good, solid all-around icon in the community.

Another public memorial in Harlem is being planned for June.