Jets end their season again on the outside of the playoffs 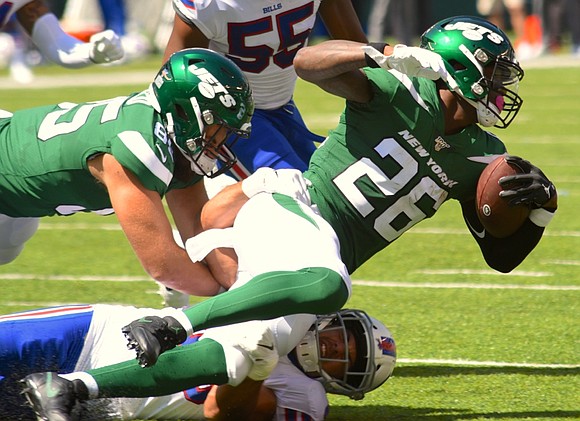 One regular season game remains for all 32 NFL teams on the 2019-2020 schedule. The playoffs are upon us and the Jets won’t be going––once again. But the organization is hopeful that their trials and tribulations this season will be beneficial as they believe the foundation for a post-season run next year has been laid.

Jets running back LeVeon Bell put the state of the team in perspective following the Jets’ 16-10 win over his former team, the Pittsburgh Steelers, at MetLife Stadium on Sunday.

“We have a new program with new guys and new faces and coaches, injuries and things like that,” said Bell. “When all of that happens, it’s going to take time to get the ship sailing in the right direction. Now, we’re starting to see the ship turn a little bit.”

Jets wide receiver Robbie Anderson expounded on Bell’s assessment. “It was still all new to us,” Anderson said. “New scheme, new offense, learning each other as players and coaches, still learning the plays.”

“We do need to play more consistent football, especially on offense, but there are definitely some bright spots that we can continue to work on this off-season. So, yeah, we’re not too far away.”

The Jets have a 5-3 record at home with three impressive wins against the Dallas Cowboys, Oakland Raiders and Pittsburgh Steelers, teams that were playoff contenders for the better part of the season. The Cowboys are still in contention.

“It’s always good to beat a good opponent,” said Jets second-year quarterback Sam Darnold, “But every team in the NFL is good. It’s nice to just come out here on a Sunday and do our job, execute and win a football game.”

Having a winning record at home is paramount to making the playoffs. But at 1-6 away from MetLife Stadium, the Jets will have to substantially improve on the road next season. But protecting one’s home turf is the first step toward being a postseason contender.

“That’s something that we wanted to establish, that we’re a tough team to beat at home,” said Jets head coach Adam Gase. “Being able to start like this in year one and say we’re 5 and 3 at home is a positive thing for our program.”

The 6-9 Jets have one more challenge, a divisional road game against the Buffalo Bills on Sunday to close out their season after a 1-7 start. The 10-5 Bills are in second place in the AFC East behind the New England Patriots and have already clinched a wildcard spot.

“We’re not going to the playoffs and that hurts,” said Jets wide receiver Robbie Anderson. “But we’re building a lot of momentum for next year.”