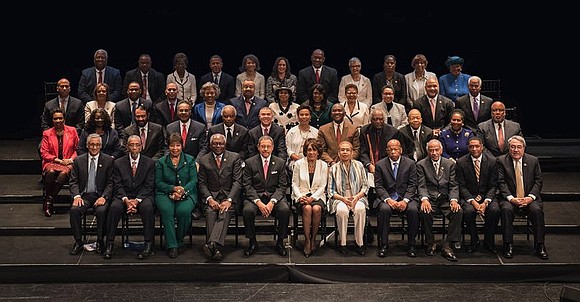 Shortly after the House Judiciary Committee voted along party lines to impeach President Donald Trump on Friday, December 13, members of the Congressional Black Caucus (CBC) held a conference call with publishers of the National Newspaper Publishers Association (NNPA), the trade association of Black Press publications from around the country.

While CBC members addressed the impeachment proceedings, the call was a reminder that Congress continues to work on other pressing issues.

The members discussed the passage of the FUTURE Act, legislation that provides needed funding to Historically Black Colleges and Universities (HBCUs) and other educational institutions.

“Historically Black Colleges and Universities, Tribally Controlled Colleges or Universities, and other Minority-Serving Institutions (MSIs) play a significant role in expanding access to higher education for low-income students and students of color,” said Scott, the Chair of the House Committee on Education and Labor.

“Unfortunately, despite their outsized role in serving our nation’s most underserved students, these schools have historically been under-resourced compared to other institutions of higher education,” Scott stated.

“The FUTURE Act won’t only guarantee at least $250 million per year for HBCUs and MSIs; it will simplify the Free Application for Student Aid (FASFA) and makes it easier for students to access student aid and repay their loans,” Scott continued.

The FUTURE Act, which stands for Fostering Undergraduate Talent by Unlocking Resources for Education, unanimously passed the Senate.

The bill has been sent to the president for his signature.

“HBCUs and MSIs provide pathways of opportunities for millions of Americans who come from low-income families. As a two-time graduate of North Carolina A&T State University, and a retired professor of 40 years at Bennett College for Women, I as well as all the pupils that I had the pleasure of teaching, are a testament to the power of these schools which mold their students into the leaders of tomorrow,” said Adams, the Chair of the House Higher Education and Labor subcommittee on Workforce Protections

“This agreement will secure $255 million a year for these institutions to serve over eight million students of color, preparing them for careers in our STEM professions,” Adams stated.

The legislation also reduces FAFSA by 22 questions and allows the Internal Revenue Service to directly share applicants’ tax information with the U.S. Department of Education.