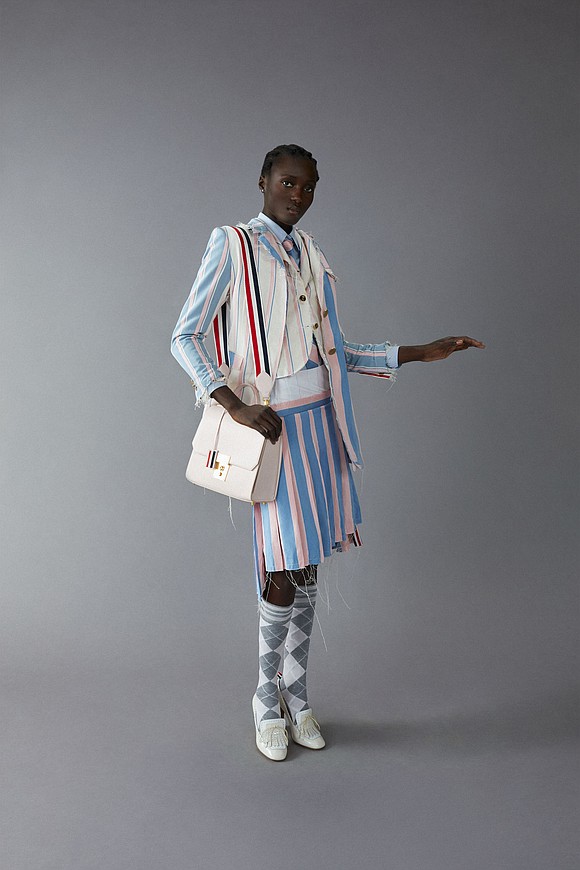 In Paris this past September, designer Thom Browne showed an impeccably tailored, ready-to-wear collection for men and women in a garden-like environment. Suit looks ruled in a variety of styles. Plaids, checks, and patterns paved the way in red/white/blue and black/white color combinations. The line included pants, pleated skirts, coats, jackets, and shirts, with even some pastel patterns and grey flannel suits. Skirt lengths were below the knee. A shapely coat received applause. Browne’s suit looks were preppy, yet gangster chic, straight from the 1940s with a 2019 flair.

For spring 2020, he was inspired by new whimsical trends that showed up in collections in London and Paris. Models were stepping down the runway in pointy-toe heels and work boots, depending on the outfit. Eighteenth-century silhouettes and attitudes ruled. There were seersucker mules worn with a corset-styled dresses. In this segment of the show, looks were femininely accented with ruffled petticoats and bloomers, all in pastel colors. Case in point: Anna Cleveland teetered down the runway in the brand’s new floating seersucker mules wearing a dress that owed its waist-whittling line to traditional corsetry. There was often a layer cake of prettiness underneath the rigorous feminine architecture: petticoats and ruffled bloomers in the softest pastel shades, for example. Regardless of genders, there were red, white and blue pieces in some styles. Traditional men’s boxer shorts were revealed, and stylized suspenders were in play.

Thom Browne, CEO and founder of the brand Thom Browne, studied economics at Notre Dame, and wanted to be an actor before he became interested in fashion design. Initially, he worked in commercials, and was interested in altering vintage men’s tailoring with Johnson Hartig, now a co-designer with Libertine. While presenting shows, Browne’s theatrics gained him worldwide recognition. There was a short collaboration with Brooks Brothers and Moncler Gamme Bleu. He started his own label in 2001, because he felt there was a gap in the casual dressing market. In the beginning, he couldn’t fund a full collection, so he made five suits for himself, and wore them around town to advertise his looks. His suit was noticed by the fashion director of Bergdorf Goodman, and his career took off. Former First Lady Michelle Obama called him to design a coat for her husband’s second inauguration.