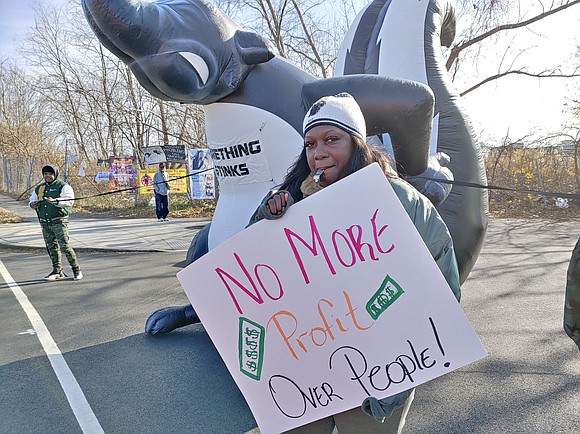 It all went down in East New York last week. A protest took place on Black Friday against the Gateway shopping center to raise awareness of the mall’s alleged lack of representation and community support.

The Gateway Center was established in Brooklyn, New York in 2002. And, for the amount of money the mall makes off the community, very little goes back in according to community leaders. New York Assemblyman Charles Barron has expressed problems with the lack of effort in not only supporting the community, but also simply communicating with the community.

“All malls across the country make millions, if not billions, from our Black consumer dollars, but when we want support back they don’t answer,” says Barron. “You have to respect

Barron claims that it was community leaders who negotiated for the affordable housing that made it possible for Gateway to come into Brooklyn––and take up so much real estate, over 600 thousand square feet. However, as more housing issues arise, big initiatives are needed to pour into the community. Unfortunately, Gateway has yet to do so and Barron sees this as “economic exploitation.”

The AmNews has repeatedly reached out to the Gateway Center via phone and email but received no response by press time.

Melinda Perkins, district manager for the Community Board 5 District Office, states that, “The real push for us to go out was based on the fact that we were reaching out for three years as a community board...but they were being non-responsive. We want to make sure some of our local vendors who are currently on side streets or setting up on the side of parks, would get the opportunity to utilize some of that mall space.”

The Mall consists of many national and international chain brands such as Target, Old Navy, DSW, Home Depot, etc. However, of the 47 stores represented, none are local, small businesses. Moreover, according to community board members, store initiatives to donate to charities, schools, and young people are all directed outside of District 5. In fact, a local East New York cheerleading squad went up to cars in the Gateway parking lot, asking for money to support

“When you have this billion dollar operation happening behind, it should be much easier for them to connect and be supported,” says Perkins. “They shouldn’t be out in the cold asking cars for donations.”

This issue, protestors insist, falls in line with the much talked about occurrence of gentrification in Brooklyn––big businesses are coming into Brooklyn, taking resources, and not supporting the community that gave them those resources. Deputy manager of Community Board 5 District Office, Keron Alleyne, works to show people of the community just how valuable their home is.

“We have been very poignant about the fact that everyone else sees East New York’s wealth, but the people in the community don’t see it,” says Alleyne. “People are coming here because there is great potential and wealth in East New York, and the community needs to see it as well. They need to know that they have stake in it... they get a say in what happens to their community.”

As the District 5 Community board has reached out to Gateway to express concerns with no avail, they say that the only way they saw left to get their attention was to protest and raise awareness in the community giving out 2,500 fliers.