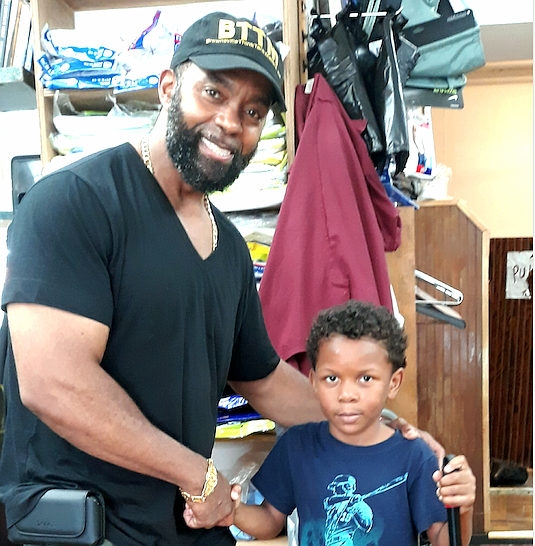 Al Mathieu, a Brownsville, Brooklyn, native aids his community however he can.

“Watching youth grow up, transitioning into things that jeopardize their lives, getting shot and killed made me want to give more to the community,” said Al.

As an advocate for the youth and for knowing Black history and the connections we’ve had from the past to the present, Al taught Native American history for a year and then went on to start his own barber shop business.

“Aside from teaching Native American history, I also taught Black history classes in East New York and in Brownsville twice a week as part of an afterschool program to educate the youth on what is not taught in schools about our history,” said Al.

In 2014 John Jay professor Greg Donaldson contacted Mathieu with a proposition for working with individuals who were previously incarcerated.

“It can be seen as a badge of honor, like a rite of passage. I’ve been there, and I had no interest in that, my interest would be helping the youth who have not been to prison,” Mathieu told AmNews.

Professor Donaldson later met Al along with four other gentlemen at the Brownsville Recreation Center to brainstorm ways to help the youth. They came up with the idea to offer public teaching to youths 13-18, who are considered at risk.

Al, in 2015, did life coach training with Good Shepherd Services. He worked with kids ages 8-18 who were on probation, he assisted with the job readiness program which Barclay sponsored and with whom they still partner today.

Mathieu recalled when he was 15 and his brother had a pair of clippers in the house, he mentioned that he was able to use those to give himself a shape up. He learned from that and the most inspiring thing he felt that he did was to open a second barber shop across the street from where he grew up, “My mom is deceased, but I know that would have made her proud,” Al said.

Al recalled the moments when he would go listen to talks by Dr. John Henrik Clarke. He also remembers being educated by going to the old Slave Theater in Brooklyn and learning about the oppression of Black people.

According to Al, how we were educated is not right, “We are the greatest thinkers, the greatest knowers, everything that was introduced to this world came from Black people.”

To understand this, Mathieu recommends reading “The Browder File: 22 Essays on the African American Experience,” a book written by Anthony Browder. He has sold this book to help educate the Black community on their history.

“Native American history is similar, we were taken from our lands, and their lands were taken from them,” said Mathieu, “in school they don’t teach the Native history, they start with the founding fathers, all based around Europe.”

Al mentions that African/Black history and Native history are similar, and that there is nothing in common with Europeans, “They just came to steal, we didn’t take over.”

Knowing all this, Al Mathieu encourages the Black community to be more conscious of walking through life. “Educate themselves, study and know thyself, know who you are, sit and meditate; take time out, to strengthen your path.”