Nets dissed without reverence must step to the Sixers tonight 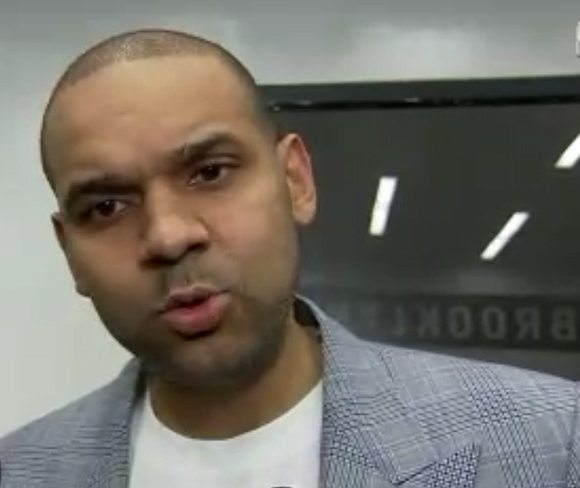 The Brooklyn Nets will be in Philadelphia tonight for Game 5 of their first round match up against the 76'ers without general manager, Sean Marks, for what could be their last game of the their 2018-19 NBA season. Marks was suspended for one game by the league without pay and fined $25,000 for entering the referees’ locker room (off limits without an invitation) after the game to protest what's been deemed, "poor officiating" which affected the outcome of Game 4 in Brooklyn on Saturday, a 112--108 loss for the Nets’ leaving them down 3-1 to Philly in this Eastern Conference series.

The Nets must win tonight, to avoid elimination, to bring the series back to Brooklyn for Game 6 in their building on Thursday night.

In addition to the 25K extracted from Marks, the NBA also fined Brooklyn's Jared Dudley $25,000 and Jimmy Butler $15,000 for their under the basket altercation that spilled into the fan and photographers section at the 7:42 mark of the third quarter. Ben Simmons was also involved, but not fined. Both Dudley and Butler were ejected.

Dudley, a savvy 6-foot-7 small forwardi nserted into the Nets' starting line-up on Saturday for the first time during ths post season for his strength and experience, came to the defense of teammate, young centerJarrett Allen (21 points, 8 rebounds, 4 assists) who was overzealously fouled by Joel Embiid, also charged with a flagrant 1 by the officials.

Embiid has brutalized Allen throughout the series. His first infraction, his first post season flagrant, was an elbow to Allen's jaw that bloodied the inside of his mouth, knocking him down in Game 2. The penalty lacked the severity of the infraction, which undoubtedly was one of Marks' complaints.

Dudley and his teammates were also incensed by the disrespectful and dismissive attitudes of Embiid and Simmons regarding Embiid's Game 2 infraction, and throughout the series overall.

During a post game national television interview after Game 4 on Saturday, when asked about Dudley stepping to him, Embiid stated with no reverence. None. "First of all, he's a nobody (referring to Dudley), so when opponents try to do stuff like that, that's just to get us out of the game."

If Dudley could do it again, he would have gotten more for his penalty check to the NBA.

"I would have gotten my monies worth a little bit more," said Dudley. "If anything, I should've gotten him worse. You stand up when it's time to stand up."

Standing with Marks and Dudley is Nets' co-owner Joe Tsai, also fined $35,000 by the NBA yesterday, Monday for making public comments that are deemed detrimental to the NBA. In a tweet Tsai wrote, "My partners and I have spoken, and the entire Nets ownership group support our GM Sean Marks for protesting the wrong calls and missed calls. NBA rules are rules, and we respect that, but our players and fans expect things to be fair."

With support from the top of the Nets' organization, their players have to step up tonight (Tuesday), get their weight up, get their $85,000 in fines worth, get this series back to Brooklyn, 3-2 for a Game 6.

"We're all in this together," said Allen. "Even Joe Tsai got into it."