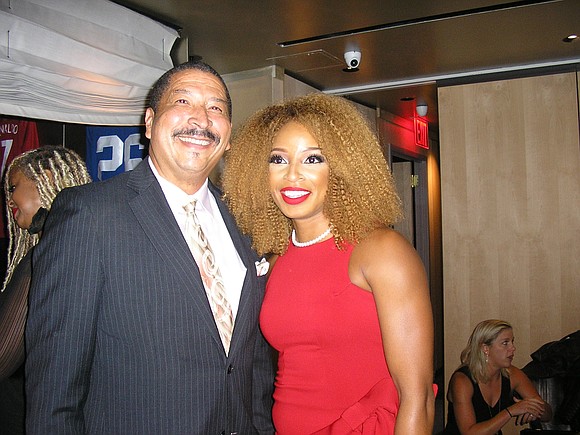 Natasha Hastings with Bassett Thompson, director of Track &Field at the Armory, at the inaugural Tea Time gala Contributed

In thanking her mother for all the sacrifices she’d made to further Hastings’ track aspirations, Hastings noted that she hopes the foundation can lessen that burden on up-and-coming athletes. Those who helped shape Hastings’ path in the sport were on hand to share the moment.

“The first time I saw her running at Colgate…I saw her talent right away,” said Sean London, Hastings’ coach from the age of nine to 18. “She was very easy to coach because she was driven.”

Hastings’ coach at A. Philip Randolph Campus High School in Harlem, Phyllis Anderson, described her as “quiet, poised, responsible, intense and focused.” Anderson said, “This event is showing me her fortitude and drive to put something together to support young athletes.”

“I love that she’s giving back to the same group of girls that she represents,” said 800-meter runner Olympian Ajeé Wilson. “It’s very inspiring and it makes me think of my start in the sport and how difficult it was for us to raise money to go to nationals. We were asking friends, family and local businesses.”

Track twins Madison and Ka’Mani Brown, 16, from Brooklyn, did a spoken word performance and shared what an organization such as Hastings’ foundation means to them. In track since the age of 7, Madison, a middle distance runner, and Ka’Mani, a sprinter and hurdler, both dream of earning college athletic scholarships and appreciate the effort to provide scholarships to get young athletes to competitions.

“I’ve been afforded the opportunity to travel the world and live my dreams, very much so because of my village,” said Hastings, who started her Tea Time events to tackle issues that girls and women deal with in and out of sports, such as body image and self-esteem. “I want to afford girls the same opportunities that I’ve had.”