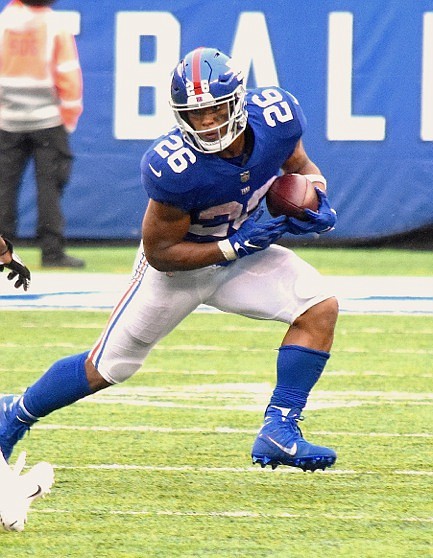 Saquon Barkley and the Giants head to Philadelphia this Sunday to face the Eagles hunting three straight wins for the first time since the 2016 season. Bill Moore photos

It was only the Tampa Bay Buccaneers against whom the Giants hung a season high in points this past Sunday at MetLife Stadium, bettering their record to 3-7 with a 38-35 victory. But it was another morale boost and positive outcome on which to build in winning their second straight game after losing seven of the previous eight.

Now the Giants will face the Philadelphia Eagles on the road this coming Sunday with a chance to engineer their first three-game winning streak since stringing together six in a row from Oct. 16 to Nov. 27 in 2016, when they finished 11-5 and garnered a wild-card berth in the postseason.

The Buccaneers came into New Jersey with one of the worst defenses in the NFL and did nothing to improve their awful statistics or dispel a much-deserved reputation. And the Giants successfully took advantage of their opponent’s weakness. Sensational rookie running back Saquon Barkley rushed for 142 yards and scored three touchdowns, two rushing and one on a six-yard pass from Eli Manning early in the first quarter as the Giants took a 7-0 lead.

The Buccaneers, who are ranked 28th out of 32 teams in total yards allowed (3,959) and last in points surrendered per game (32.9), made a furious second-half comeback after falling behind 24-14 in the third quarter, led by the 2015 No. 1 overall pick Jameis Winston. The much maligned quarterback came off the bench to replace starter Ryan Fitzpatrick, who was horrendous in throwing three interceptions. Yet Winston’s heroics fell short and the Giants closed out the Buccaneers on an interception by cornerback B.W. Webb with 23 seconds remaining.

“We definitely got the run game going today,” said Barkley. “...When we get the run game going, everything else kind of clicked. We got them to commit more to the run, so we could take some deep shots and take shots down the field. It also keeps the clock and the chains moving.”

Barkley ended the weekend sixth in the league in rushing with 728 yards and third in all-purpose yards at 1,268. His 540 yards receiving was first among running backs.

“He’s had a positive contribution in our three victories, and he’s gotten better in each of the other games,” said Giants head coach Pat Shurmur. “It’s great for the New York Football Giants if Saquon’s with us.”

The offensive line was also better. The unit, which has struggled all season, opened up rare holes for Barkley throughout the afternoon and provided ample protection for Giants quarterback Eli Manning, who was a near flawless 17-18 for 231 yards.

The Giants are in a fortuitous position to defeat the defending Super Bowl champion this Sunday. The 4-6 Eagles, third in the NFC East, one game ahead of the last place Giants, have sustained a rash of injuries this season. They were crushed by the 10-1 New Orleans Saints 48-7 on the road this past Sunday.

With 6-4 division-leading Washington losing starting quarterback Alex Smith to a broken fibula and tibia in his right leg Sunday and the 5-5 Cowboys a model of inconsistency, as implausible as it may seem, the Giants remain alive for the division title with six games remaining in the conclusively weak NFC East.