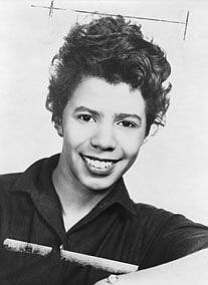 It’s one of the most iconic images in modern photojournalism. The blackened, burned out shell of what was once a blue Ford Fairlane station wagon circa 1964. It had been the car civil rights workers James Chaney, Michael Schwerner and Andrew Goodman were traveling in on the afternoon of June 21, 1964. Although the burned-out automobile was found a few days later, it wasn’t until several months later that the men’s bodies were found tossed into a shallow grave at Klan member and businessman Olen Burrage’s Old Jolly Farm. They had been murdered by Mississippi segregationists.

What is less known about this event is that writer and playwright Lorraine Hansberry was responsible for helping to raise funds at her home in upstate New York to pay for the station wagon. Like almost all Blacks who achieved some semblance of fame and visibility, Hansberry had a dual public identity. She couldn’t just be a playwright. She was also an activist who reported on civil rights issues in the U.S. and human rights and colonialism abroad. She famously met with Robert Kennedy at his request in 1963 in the wake of urban uprisings, to advise him on what course of action she felt the government should take. Filmmaker and director of the upcoming PBS American Masters documentary “Lorraine Hansberry: Sighted Eyes/ Feeling Heart,” Tracy Heather Strain explained, “Lorraine was an activist first and foremost. Of course, she identified as a writer, but she was an activist and she tried different ways of going for social change. She saw her father try the legal route and she became a journalist, and then changed to theater because she saw there was power in art to change society.”

Strain became interested in Hansberry as a teen after her grandmother took her to see a production of Hansberry’s “To Be Young Gifted and Black” in her hometown of Harrisburg, Pa. Strain said, “I’d never encountered a young African-American woman who was speaking about the things she was speaking about as presented in the play. She was speaking about race and class and her feelings about success. To see this representation of this middle-class woman or you know, someone like me, it was very powerful.” Strain’s film skillfully showcases how Hansberry navigated these identities and other more guarded identities throughout her life.

Although Hansberry was born into a well-off Chicago family in 1930, she carried with her painful experiences of racism she both endured and witnessed throughout her very short life. In the documentary, Hansberry’s sister recalls them all being, “Spat at, cursed at and pummeled in the daily trek to and from school.” Her family had to hire a bodyguard. After their house was firebombed by a mob of whites, they were forced to leave.

Hansberry came to Harlem in 1950 and worked as a journalist at Paul Robeson’s radical newspaper, Freedom. Strain said, “She spent a significant amount of time in Harlem. She worked there, she gave street corner speeches there. In our film, we have a section where she’s reading from a letter that she wrote to a friend and she said she just really loved being there.”

Debuting in 1960, the play “A Raisin in the Sun” is the work for which Hansberry is most known. Voices from the Gap, a website that showcases women writers of color observes, “Hansberry’s work was a preview of the African-American spirit that engulfed the nation in the historic changes of the Civil Rights Movement.” There is no doubt that it was her childhood experiences in both renting to working-class Blacks as well as trying to desegregate an upper-class white neighborhood that informed the writing of the play.

About a widow who desires to move her family to a neighborhood that happens to be all white, the play ran for more than 400 performances. It won the New York Drama Critics Circle Award as Best Play of The Year. Hansberry was the first Black person to receive this prize. She also wrote the screenplay for the movie adaptation. Sidney Poitier, who plays main character, Walter Lee Younger, on Broadway and in the film, appears in the PBS documentary and visibly chokes up recalling some of the lines of the play, even after all these years.

The PBS documentary unabashedly delves into Hansberry’s identity as a closeted lesbian, which came to public attention only in the past 10 years or so. She subscribed to one of the first journals for lesbians, The Ladder, and wrote them letters signing with just her initials. One subject that she talked about a lot was “Lesbian women in heterosexual marriages.” Although officially married for 10 years to Jewish writer Robert Nemiroff, they separated early on. Hansberry embarked on several passionate affairs with women. One of them was a neighbor of hers at her 337 Bleecker St. building in Greenwich Village. She and Nemiroff remained close friends and business associates until she died.

The film puts some of Hansberry’s now famous lists on display. Some were typed, and many were handwritten in yellow legal paper. Usually, there would be a column for things she liked and another for things she disliked, was bored by or found annoying. The lists alone made it clear her passion for several women, including an ongoing crush on singer, dancer, actress Eartha Kitt.

This documentary is part of American Masters’ Inspiring Woman online campaign and will premiere in 2018 on PBS.