Cuomo says the quiet parts out loud in agenda speech 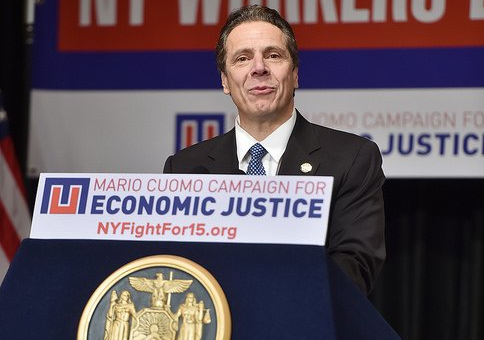 Governor Andrew M. Cuomo unveils the first signature proposal of his 2016 agenda – his push to restore economic justice by making New York the first state in the nation to enact a $15 minimum wage for all workers. Kevin P. Coughlin/Office of the Governor

New York State Gov. Andrew Cuomo’s “First 100 Days” speech didn’t surprise many this week. But the governor stating things he previously said quietly or that were pure speculation by pundits did its job in putting Albany on notice.

Cuomo spoke to the New York Bar Association Monday, unveiling his agenda for the first 100 days of his new term. The governor highlighted his desire to cut taxes for working-class New Yorkers, increase the waiting period to purchase a firearm, keep the millionaires’ tax and fight against the $10,000 annual limit on federal deduction for state and local taxes.

But the governor made some waves by openly advocating for the legalization of recreational marijuana in the state.

“We will advance our justice agenda and particularly address the forms of injustice that for too long have unfairly targeted the African-American and minority communities,” said Cuomo. “FDR said, ‘No democracy can long survive which does not accept as fundamental to its very existence the recognition of the rights of its minorities.’ And the fact is, we have had two criminal justice systems: one for the wealthy and the well-off, and one for everyone else. And that’s going to end. We must also end the needless and unjust criminal convictions and the debilitating criminal stigma and let’s legalize the adult use of recreational marijuana once and for all.”

Earlier this year, Cuomo and the State Health Department released a report recommending Albany legalize recreational marijuana. The report concluded that taxes from marijuana legalization would bring in more than $1.3 billion annually in sales and recreational marijuana should be made available across the state to those of age.

Kassandra Frederique, New York State director of the Drug Policy Alliance, praised Cuomo for his open stance on marijuana legalization but wants him to help out the communities hurt by its criminalization.

“Governor Cuomo and the legislature must implement legalization in a way that ensures equity and diversity, while reinvesting in the communities hit hardest by marijuana criminalization,” said Frederique in a statement. “The Marijuana Regulation and Taxation Act does all of these things, so Governor Cuomo and the new Democratic majority have a golden opportunity to get legalization done the right way, right away.”

The Marijuana Regulation and Taxation Act, sponsored by New York State Sen. Liz Krueger, would legalize, regulate and tax marijuana under state law similar to how alcohol is regulated. At a recent news conference, Krueger said legalization would not only help the economy, but stop the over-policing of certain people when it comes to marijuana.

“Prohibition of marijuana is a policy that just hasn’t worked, no matter how you look at it, and it’s time to have an honest conversation about what we should do next,” said Krueger. “The illegal marijuana economy is alive and well, and our unjust laws are branding nonviolent New Yorkers, especially young adults, as criminals, creating a vicious cycle that ruins lives and needlessly wastes taxpayer dollars.

“Worst of all, this system has resulted in a civil rights disaster: African-Americans are dramatically more likely to be arrested for pot possession than whites, despite similar rates of marijuana use among both groups.”

Amelia Adams, a representative for We Rise to Legalize (a diverse coalition of faith leaders, civil rights leaders, community leaders and grassroots advocates), echoed similar sentiments, pushing for Cuomo to not only end marijuana criminalization but also give the communities hurt by disproportionate marijuana arrests the first chance at selling legal weed.

“As he moves to legalize marijuana in 2019, Governor Cuomo must prioritize racial justice and empower communities of color harmed by the war on drugs,” stated Adams. “New York should give the first licenses for selling legal marijuana to New Yorkers convicted of nonviolent marijuana-related crimes and to minority and women-owned businesses.”

Cuomo also made waves with just a couple of lines in the middle of his speech when he advocated for automatic voter registration and giving New Yorkers a day off for Election Day.

“In the meantime, the federal government is working to disenfranchise voters; we have to do the exact opposite and improve our democracy,” said Cuomo. “How do you do it? Automatic voter registration. Make it easier to vote and participate by voting by mail and by early voting, synchronize the federal and state election days.”

He continued, “And let’s make a real statement about the importance of voting and let’s make Election Day a state holiday and say to people, ‘Get out and vote.’”

Lawrence Norden, deputy director of the Democracy Program at the Brennan Center for Justice, said with voting reform and other changes around state races, New York has the chance to be a leader when it comes to the voting process.

“With small-donor public financing for state races and robust voting reforms, the governor can make Albany responsive to the people,” stated Norden. “These changes would create the foundation necessary to pass reforms that have been neglected at New Yorkers’ peril: housing, health care, the environment, criminal justice, education and more. As he has done in the past, Governor Cuomo called today for comprehensive campaign finance reform and voting reform. The new leadership in the legislature should champion these changes, not block them.”

Some of Cuomo’s platform could be seen as a result of his Democratic Primary challenger, actress Cynthia Nixon, who took to social media to take credit for pushing the governor further to the left. “Sometimes people ask me: was it worth it? YES. Here’s why…,” said Nixon on Twitter while highlighting a New York Times list of highlights from Cuomo’s 2019 agenda.

Democrats are empowered by Cuomo’s platform and by the so-called blue wave that saw liberals take over the House of Representatives in November. In New York, a collective of community organizations, activist groups and advocacy organizations hope this agenda is only the beginning for the governor.

“Today we send a message to every legislator, but primarily a message to Cuomo, Speaker Heastie and Senate Leader Stewart-Cousins: we are New York, we are united, we will not accept excuses or watered down policies,” said VOCAL-NY Co-Director Jeremy Saunders. “Pass the People’s Platform or suffer the political consequences.”

“In November New Yorkers voted overwhelmingly to change directions in Albany—and now it’s time for Albany to deliver,” added Charles Khan, organizing director for the Strong Economy for All Coalition. “We’re putting every lawmaker on notice: the watered down policies of the past don’t work. We’re united in our first demand: get big money out of politics and get real money into our communities. We’re holding Albany accountable for action, and that means passing the People’s Platform.”

Along the lines of racial and social justice, Cuomo also recommended ending cash bail around the state, citing how it punishes lower-income New Yorkers.

“Now, the agenda I have outlined is ambitious, indeed,” continued Cuomo. “I understand that. I have worked in government a long time on many levels and I understand how hard it is to make dramatic change in government. The lines on my face are proof of how hard it is. But I also know that few great achievements are ever done without pain.”

New York Civil Liberties Union Executive Director Donna Lieberman hopes that Cuomo comes through on all of his plans to make New York State the liberal bastion he wants it to be. She knows that the governor won’t get help from Washington, D.C.

“It’s a new day in New York. With changed leadership in Albany, our state Legislature has the opportunity—and the mandate—to transform New York into the state that we’ve always envisioned, one that secures fairness and equality for all New Yorkers,” stated Lieberman. “President Trump has made it abundantly clear that his administration will continue to undermine the principles that uphold our democracy, but we can resist by making New York a beacon for humane values and democracy.”