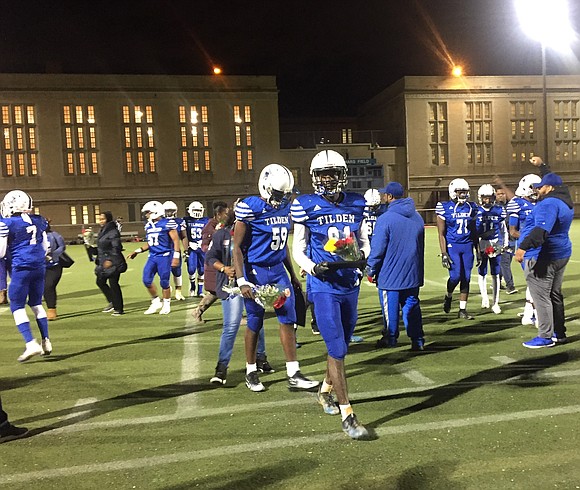 When Sandra Broome’s 14-year-old son joined the Blue Devils, a high school varsity football team in 2010, her teen, who once struggled to complete his homework, started waking up at 6 a.m. for tutoring. It was two longtime football coaches at Samuel J. Tilden High School in East Flatbush, Eric Waterman and Chester Joseph, who offered support.

“My son could’ve been on the street,” recalled Broome, 60, whose son, now 23, is an alumnus of Penn State University. “Instead, every night he did his homework with those coaches and played football.”

The Tilden Blue Devils were just two games away from the end of the football season in late October when Waterman and Joseph were suspended, pending a New York City Department of Education investigation into an alleged fight in the public school’s locker room.

Both coaches have declined to comment on their suspensions. The team finished its season with Yves Delva substituting as coach.

Now, nearly 300 parents are petitioning for Tilden High School to reinstate the two varsity coaches. With less than a month left in the fall semester, parents fear the team will be without a coach for the upcoming season in August.

“We have no idea what’s going to happen,” said Nekia Phillips, 38, of Canarsie, Brooklyn, who has two teenage sons on the team. “The boys eat, sleep and breathe football.”

The community is urging a speedy investigation of the coaches followed by a reinstatement. The coaches were reportedly suspended without pay for reporting an “incident that took place among students,” the petition reads.

Department of Education representative Miranda Barbot did not respond to repeated requests for comment.

Monique Waterman said her 15-year-old son, who plays on the team, is fielding questions about his father’s absence.

“He is trying to keep up his spirits,” said the coach’s wife, a mother of four who launched a rally in response to the suspension. “He is talking to his teammates as if his dad was there to prep them.”

Rosanne Patrick, 48, also of Canarsie, said her son was “restless in the classroom” before he received mentoring from Waterman.

“I can call anytime my son has a situation at school,” said Patrick, whose 17-year-old son is the team’s running back. “He’s a great father figure for these young men.”

While the suspension is under review, the coaches have been told they should not speak with the players.

“My concern is how the kids will handle this,” said Peter Waterman, a retired coach who is no relation to Eric Waterman. “I hope they use it as motivation.”

As team members in blue jerseys huddled on the field for a home game three weeks ago, Jermaine Phillips,17, and his 15-year-old brother Shamond said they missed the father-like figures relaying cues from the sidelines.

“They would help us keep our head in the game,” said Jermaine Phillips, who learned of the coaches’ suspension via phone call. “It’s not the same.”