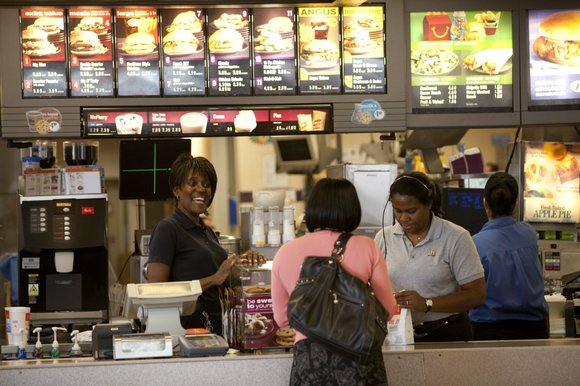 Restaurant Opportunities Centers United, an organization that advocates for labor rights in the restaurant industry, keeps pushing for better wages for workers.

ROC United President Saru Jayaraman thanked Cuomo, in a statement, for coming out on behalf of workers, “especially the hundreds of thousands of women and people of color in New York who endure serious hardship because they are forced to make a living off a subminimum wage, which is only $7.50 in this state.”

Other labor leaders and advocates praised Cuomo for his actions as well.

“32BJ is committed to raising wages and standards for workers across the state,” said 32BJ President Hector Figueroa in a statement. “It is long overdue for tipped workers to be afforded the fair wages, dignity, and respect on the job that they deserve. We are heartened by the governor’s support for the One Fair Wage campaign and look forward to working together to make it a reality.”

“PowHer New York applauds the announcement of Gov. Cuomo’s support for One Fair Wage, which builds on his ongoing commitment to equality for women in New York,” stated PowHer New York President Beverly Neufeld. “The current subminimum wage puts restaurant workers, mostly women, in economic and physical peril. Changing this outdated, discriminatory practice is another critical step toward ensuring that these and all employees have safe working conditions and economic security.”

ROC United also took their fight to Washington, D.C. A new report, titled “Our Tips Belong to Us: Overcoming the National Restaurant Association’s attempt to steal worker’ tips, perpetuate sexual harassment, and maintain racial exploitation,” revealed that the National Restaurant Association has been lobbying President Donald Trump’s Department of Labor to push for federal regulation that would make tips the property of employers and not labor.

“The DOL’s proposed rule changes would also put the Trump administration’s policy in line with that of Donald Trump’s business practices,” read the report. “Trump’s Mar-a-Lago resort famously posted in its recruitment ads that servers were to expect $11.88 per hour with ‘no tips’ while working at that golf resort. Catering staff at the Trump SoHo Hotel in New York also sued Donald Trump and several family members for allegedly stealing their tips by paying a flat wage and keeping a 22 percent service fee added to customers’ bills. Trump’s DOL is thus proposing regulation that would confirm that Donald Trump has the right to keep his employees’ tips in all of his various businesses.”

Jayaraman wants the report to be a springboard for advocates fighting for labor rights.

“The subminimum wage system already feeds an epidemic of discrimination and sexual harassment in the restaurant industry,” said Jayaraman in a statement. “The proposed regulations to confiscate workers’ tips will only exacerbate these unacceptable conditions.” She continued, “We hope this report inspires workers, employers and consumers to call on Secretary Acosta to stop this outrageous proposal, and instead to do his job by pushing the restaurant industry to take substantive steps toward solving its sexual harassment problem once and for all. That must include both establishing One Fair Wage and allowing workers to keep their hard-earned tips.”