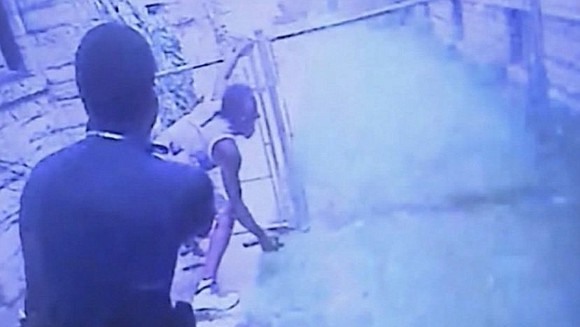 The family of Sylville Smith was shown body camera footage in court on June 15, 2017 showing the brief chase that ended with death of Sylvillle Smith at the hands of a Wisconsin police officer Dominique Heaggan-Brown. Pool photo

Members of Smith's family could be heard crying in the courtroom as the verdict was read. The shooting death sparked days of unrest in Milwaukee.

Judge Jeffrey Conen had instructed the jury of nine women and three men to consider lesser charges in the reckless homicide trial.

Heaggan-Brown still faces charges in an unrelated sexual assault investigation for which he was fired from the police department.

The prosecutor argued that Heaggan-Brown fatally shot Smith as the suspect attempted to surrender. But the former officer's attorney countered that his client made a split-second decision to protect his life and that of another officer.

The jury began deliberations on Tuesday, less than a year after the shooting in northwest Milwaukee's Sherman Park neighborhood.

Body-camera video from another officer -- played for the jury last week -- showed that Heaggan-Brown shot a second bullet into Smith's chest after the suspect hurled his weapon over a fence and had his hands near his head. Smith was on the ground when he received the fatal shot.

"He knew that Sylville Smith was attempting to surrender."

But defense attorney Jonathan Smith argued his client followed training and fired the second, fatal shot because he believed his life was in danger.

"The state admits that the first shot was a justified shot," the lawyer told the jury, according to the station.

"And our argument is that justification did not change over the course of 1.69 seconds between shots."

The defense rested Monday after calling its lone witness, Robert Willis, an expert in police use of force, according to WISN.

His testimony centered on the 1.69 seconds separating the two shots. He testified the officer's decision to fire again was made before he even pulled the trigger. The second shot was justified, Willis told the jury, because officers are trained to assume a suspect may have more than one weapon.

Heaggan-Brown experienced the encounter in "real time," not in frame-by-frame motion as it was shown to the jury, Willis said, according to WTMJ.

"So when we see the trigger being pulled, we have to not consider that the moment of decision," he said. "It's not. We have to go back -- and I can't tell exactly how many frames but we have to go back two-tenths or three-tenths of a second -- we have to go back several frames ... to delve into the decision-making process that goes into firing this shot."

Willis, who wrote the use of force manual used by Milwaukee police officers, told the jury that Heaggan-Brown justifiably responded to a "deadly threat," WISN reported.

The reaction to the video, including sobs from Smith's family, caused the judge to clear the courtroom. The defense attorney called for a mistrial, saying the family's response could influence the jury, according to CNN affiliate WITI-TV. Conen denied the request.

Officer fired over a different investigation

The shooting sparked days of unrest in the Sherman Park section of Milwaukee, a city long torn by racial tensions.

Prosecutors said his first shot was justified, but not the second, according to WISN.

Heaggan-Brown's former partner, Ndiva Malafa, testified last week they were chasing Smith, 23, because they saw he had a gun.

"I saw Mr. Smith exit the vehicle. I observed the firearm and at that point, we made eye contact. At that moment, I believe I started to -- I see him running northeast. Out of the corner of my eye, I see Heaggan-Brown chase him as well," Malafa testified, WITI reported.

Malafa's body camera footage was played several times in court, according to WTMJ. Malafa also guided the jury through the footage frame by frame, the station reported.

The video picks up as Malafa jumps out of this squad car. The shaky footage shows him trailing behind Heaggan-Brown, who is chasing Smith. The suspect ran across a lawn, turned a corner and headed toward a fence but slipped before reaching it.

Smith was armed with a Glock .40-caliber Model 22 semi-automatic handgun with an extended magazine containing 23 rounds.

An autopsy showed that Smith had a gunshot wound through his upper right arm and another to his right upper chest.

In the body camera audio, which was activated 30 seconds after the shooting, Heaggan-Brown was heard yelling at Smith: "Stop reaching." He moved Smith's hand away from his waist, the criminal complaint said.

Heaggan-Brown had previously said he believed Smith "was reaching for his waist so he discharged his weapon a second time."

In an interview with WITI, Smith's brother Sedan said: "It's the longest 30 seconds of my life to be able to just watch the video."

Heaggan-Brown is the third US law enforcement officer to be tried for a shooting in the last week.

On Friday, Minnesota police Officer Jeronimo Yanez was acquitted of one count of second-degree manslaughter and two counts of intentional discharge of a firearm that endangers safety for the fatal shooting of Philando Castile during a traffic stop last year.

In Cincinnati, a jury began deliberations Monday in the retrial of former University of Cincinnati police officer Ray Tensing in the fatal shooting of a motorist during a July 2015 traffic stop.