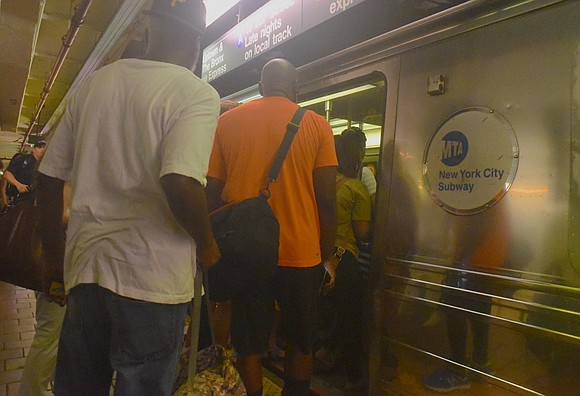 Passengers board the subway at the 125th Street Station Bill Moore

New York City subway trains can reach a top speed of 55 miles per hour, but it doesn’t appear they are living up to their full potential.

Ongoing problems with the MTA seem not to let up as delays become the norm, elected officials play the blame game and frustrated commuters continue to suffer.

Monday morning subway commuters were greeted with a rush hour nightmare when a track fire in the 145th Street Station at St. Nicholas Avenue in Harlem resulted in massive delays. Riders from Brooklyn to Manhattan on the A, B, C and D lines were delayed.

Thousands of passengers were diverted to the No. 1 line, creating even further chaos. Nine people were injured as a result of the tie-up. Trains were evacuated. Many were delayed between stations and power was shut off.

Later in the evening, delays occurred during rush hour on the C line after a sick passenger was reported at West 4th Street. Commuters got a double dose of headaches when switch problems at Canal Street caused delays on the A, C and E lines.

The whole scene appeared to be sequel to the train derailment at 125th Street just weeks ago that left 40 people injured, straphangers walking through subway tunnels and system wide delays.

“Disruptions to service are unacceptable,” MTA chairman Joe Lhota said in a statement. “we will do a better job, and we’re working every single day to deliver on that promise. The MTA recognizes the seriousness of the problem which in most cases is driven by trash on the tracks, and that’s why we’ve developed Operation Track Sweep—with dedicated teams of more than 500 employees—to reduce fires.”

As the MTA continues to try and address numerous issues that are causing delays, Lhota said a possible food ban could help reduce track fires. The agency is also implementing its Track Sweep program.

“We need to make sure the trash doesn’t get down there,” Lhota said. “Just recently I was on a train, subway train, the No. 2 train. Someone got on with a Styrofoam thing with Chinese food. There was a lot of rice and inevitably the rice fell. It was all over the place. I want to avoid things like that.”

As far as who’s to blame for the MTA’s woes, New Yorkers are pointing the finger at Gov. Andrew Cuomo, according to a new Siena College poll. Cuomo’s ratings have dropped significantly since May. Now, 46 percent of voters say they’re prepared to re-elect Cuomo and 46 percent prefer someone else.

The MTA’s problems reach far beyond track fires and food. Commuters continue to be late for work, lose wages and even lose their jobs. Results from a survey released by Comptroller Scott Stringer revealed that three-quarters of people who use subways reported being late for work over the past three months.

Low-income residents are most likely to be reprimanded on the job for train delays. Many are hourly workers who lose wages when late for an hour or more.

“We are in crisis and people are very upset,” said David R. Jones, president and chief executive officer of the Community Service Society of New York. “If you are fast food worker, your boss is not going to care if you are on a delayed train. If you work at a big Wall Street law firm, you come in late it’s different. The people who have little room are hourly wage workers.”