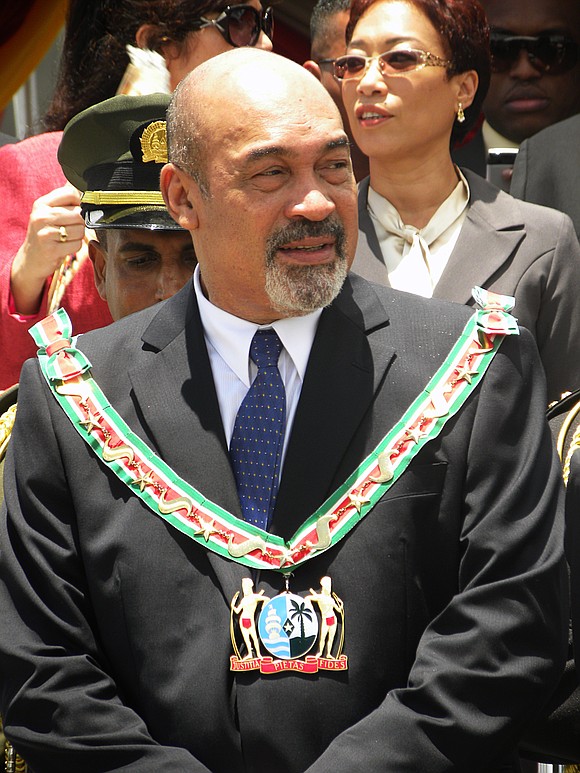 A court in Suriname has recommended a prison sentence of 20 years for Suriname’s head of state, Desi Bouterse, for his alleged role in the 1982 mass murders of 15 government opponents while he was the military strongman of the Dutch-speaking Caribbean Community nation.

The murders at a colonial era fort right next door to Bouterse’s current office and a stone’s throw from Parliament and Bouterse’s own presidential palace, took place in December 1982, almost three years after Bouterse as a young army sergeant and a group of restless soldiers had toppled the elected administration of Prime Minister Henck Arron over alleged corruption and other complaints.

At issue then were allegations by the coup makers running the country of approximately 500,000 people that the 15 were planning a counter coup with the help of Western nations such as the U.S., France and the Netherlands, Suriname’s former colonial ruler that had granted it independence in 1975.

Prosecutors allege that the group, including four journalists, clergymen, labor unionists and academics were brutally slaughtered at the riverside fort in the presence of Bouterse and other top army commanders for being counter-revolutionaries.

Bouterse has repeatedly taken political and collective responsibility for the executions but has said that he had no personal role in the killings. The mass murder stunned the normally quiet if not sleepy nation on South America’s Caribbean coast, leading to a near 40-year crusade by relatives and civil society to prosecute those who were allegedly involved.

The country later joined the regional Caribbean bloc, CARICOM, in 1995.

Late labor leader Fred Derby had said he was the only one allowed by Bouterse to leave the fort alive. His affidavit was partly used to convict Bouterse, who is serving his second consecutive term as Suriname’s elected president.

Prosecutor Roy Elgin, addressing a panel of three judges at the midweek hearing, said, “The murders were planned properly and there was a script. It was premeditated. As military leader, he was not only present during the summary executions, he also decided the fate of the victims. He behaved like a judge, and robbed his victims of their most valuable possession, their life.”

It is unclear what will happen to Bouterse going forward. His attorney, Irwin Kanhai, said, “It is not over yet.” He called Elgin’s recommendation for 20 years behind bars just a suggestion.

The recommendation by the state now means that Bouterse, almost 72, is the only leader in the bloc of 15 nations facing such a conundrum, in addition to an 11-year sentence by a Dutch court for alleged international drug trafficking. He has persistently dismissed the sentence as revenge by the Dutch for the 1980 coup, his fierce nationalism and his dilution of Dutch power and influence in Suriname.

In relation to the trial, his administration has done almost everything in its power to prevent it from going forward, including using his majority in Parliament in 2012 to approve amnesty legislation to protect himself and the more than 20 other former coup makers from jail time. A year ago, the administration had the attorney general postpone hearings indefinitely. The court overruled both moves and paved the way for the latest developments.