View Black designers’ styles at The Museum at FIT 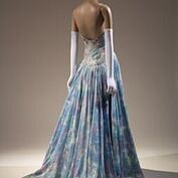 Design from the "Black Fashion Designers" exhibit at The Museum of FIT.

The Museum at FIT’s exhibit, “Black Fashion Designers,” on view now through March 16, 2017, is a compelling examination of the significance and unrecognized impact that African-American designers have had on fashion. Seeing past designs and remembering the designers was of great importance to this writer. It was an exciting time in fashion history, and the exhibit offers valuable information about those designers.

“Black Fashion Designers” opens with the fall 1986 display of a Patrick Kelly evening dress detailed with colorful buttons. Kelly’s button motifs were a recurring signature featured in his designs. His career was inspired by his grandmother, who would mend the family’s clothing.

When I was in Paris for Kelly’s Pret-a-Porter show, there was an opportunity to visit his Paris apartment (he used to enjoy making American editors feel at home in Paris). It wasn’t a party, though; he simply opened his home and greeted everyone with a beautiful smile. In his home, you caught an inside glimpse of this fabulous designer getting ready for his show, pinning and draping fabrics on his models. There was a lot of styling going on. There were always questions and decisions to be made about the makeup looks and hairstyles created by his team. We were young, and the experience was unforgettable, breathtaking, and fun.

In the introductory section of the exhibit, next to Kelly’s display, there is a fall 2012 design by Nigerian-born British designer Duro Olowu, known for his international knowledge of textiles and affinity for mixing prints. There is an intricately designed lace cape that’s a showpiece. Folks were also in awe of the beautiful wedding gown created by society dress-maker Anne Lowe (Lowe was best known for designing Jacqueline Kennedy’s wedding dress). Lawrence Steel, a Milan-based African-American designer, has a stunning black evening dress accented with Swarovski crystals. Lagos-based designer Amaka Osakwe was inspired by the rich history of Nigerian storytelling when she created her contemporary, cut-fringe dress. Another highlight is Laura Small’s red and white floral print dress, famously worn by Michelle Obama when she sang with rapper Missy Elliot on James Corden’s “Carpool Karaoke.”

The next theme, “The Rise of the Black Designers,” focuses on the period from the late 1960s to the mid-1970s. Disco music was pumping and dance clubs were jumping. Stephen Burrows’ gold evening pajamas and Scott Barrie’s black and red silk jersey wrap dress were the talk of the town. These pieces defined the era’s glamorous body-conscious style. Willi Smith’s sportswear was also in play. The fashion and mainstream press of the ’70s celebrated Black designers such as Barrie, Burrows and Smith. These designers were so special and extremely talented. It’s deep in contrast to today to notice that only 1 percent of designers for the fashion runways are Black.

“Black Fashion Designers” is organized into nine themes, beginning with “Breaking Into the Industry,” which examines Black designers working in New York. During the 1950s and early 1960s, Arthur McGhee and Wesley Tann challenged discrimination in the industry. Other designers followed in their footsteps, playing a major role in building New York as the fashion capital of the world. During the 1970s and 1980s, for example, Smith built a large, international fashion house from his quirky twists on classic sportswear. One of the best looks was a multi-color, striped ensemble. Today, Tracey Reese is an indispensable mainstay. Her multi-color striped gowns are feminine and elegant.

This exhibit is a must-see. Good show!