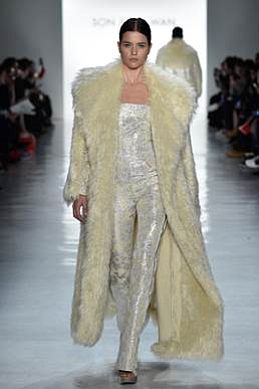 Often the fashion show starts with the audience, and Son Jung Wan’s show was no exception. Glamorous women were on the move, mingling and noticeable during the designer’s Fashion Week presentation at the Skylight Clarkson Square in New York City. It’s a tribute to every designer when a guest appears at the show in one of their garments. Son’s guests sported several of her fur styles, including a fox coat and a light blue combination knit and fur swing dress from last season. The show was a smash hit. Sumptuous furs were draped on just about every piece. The looks were luxurious.

The show opened with a stunning blue plaid jacket with raccoon detail worn over turquoise velvet pants. She showed a men’s blue plaid jacket with blue plaid pants. Son’s collection was inspired by a 1980s mood. “This season, we are able to experience the new ’80s sensibility,” said the designer. On the runway, Son emphasized exaggerated silhouettes such as jackets with very long backs. She created her own dramatic and impactful collection with various textures and materials. Other furs used for the designer’s details were fox, beaver and lamb. There were lots of mix-and-match concepts that naturally melted in various colors. For instance, a multicolor plaid or check was coordinated with a fur collar, back and sleeves. The items were composed of a variety of styles featuring the additional layered looks.

TV personalities such as Kelly Bensimon and Caila Quinn, actress Kelly Rutherford and Miss Universe 2017 Iris Mittenaere were sitting in the front row. In colors, the collection offered a sense of freedom with dramatic shades such as lipstick red, punch pink, sepia and turquoise blue-green. These colors brought a chic and genderless mood. Glamour and confidence showed through gold, white and fawn beige.

Her fabrics included bold handcrafted knit accents that mixed harmoniously with various winter materials. There was also glamorous embroidery in the metallic materials that provided special design points. A very important fabric this season, velvet was often spotted on the runways. Depending on the spotlight, velvet was transformed into several colors at Son’s show. Mixing and matching different check patterns also played an active theme. This designer has an incredible talent for putting it all together and working with colors, fabrics and styles.