Jets rise up like the day, shock KC, prepare for Denver 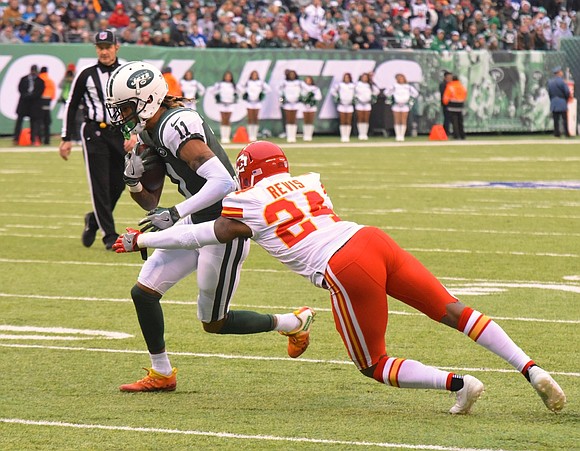 The New York Jets beat the Kansas City Chiefs 38-31 Sunday afternoon in a competitive, high-scoring, back-and-forth contest that could have gone either way until the Chiefs exhausted their final possession late in the fourth quarter.

The Jets, now 5-7, still with a possibility of a post season appearance, gave up two touchdowns early in the first quarter but scored three of their own to lead at halftime and pull out the win, adding to KC’s woes and extending their losing streak to four games, six out of their last seven.

“We gave up two touchdowns quick, but the offense ran the ball well,” said Todd Bowles, the Jets’ head coach. “I thought Mort [offensive coordinator John Morton] had a great game plan,” Bowles noted in regards to his team’s execution.

“To get into one of these games where it goes back and forth and find yourself on the winning end at the end,” reflected Jets’ quarterback Josh McCown, “it was a big step.”

The Chiefs, 6-6, now in a three-way first place tie with the Los Angeles Chargers and Oakland Raiders in the AFC West division, started the season off in September by winning five in a row, including the defeat of the New England Patriots, the defending champions, and the Philadelphia Eagles, two of this season’s best NFL teams.

The Jets prevailed because of several key second half plays on both sides of the ball. Multiple holding penalties on KC in the third and fourth quarters benefited the Jets, increased their time of possession and gave them second chance opportunities to score.

There were key plays on Jet drives: A 26-yard catch by receiver Robbie Anderson plus a KC 15-yard penalty putting the ball on the Jets’ 34; Matt Forte’s 14-yard run from the 22-yard line; a fourth quarter 51-yard pass from McCown to Jet receiver Jerome Kearse; a McCown 1-yard up the middle quarterback sneak; and rookie runningback Elijah McGuire’s 2-point conversion run.

The Jets finished the game with a season-high 42:49 total time of possession, and for the second consecutive game, Anderson and Kearse both recorded 100-yard receiving games combining for 17 receptions. Eight receptions for 107-yards for Anderson; nine receptions totaling 157-yards for Kearse, a career high.