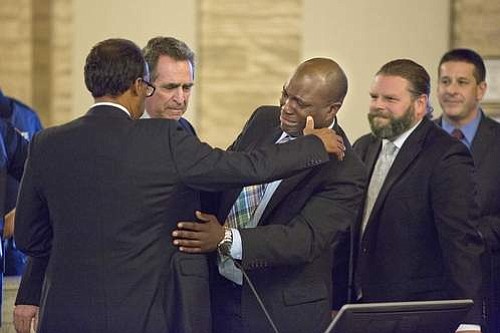 Oral “Nick” Hillary, charged with the murder of 12-year-old Garrett Phillips, was found not guilty Wednesday morning in Canton, N.Y. Judge Felix Catena’s verdict was met with a flood of emotions in the crowded courtroom.

“This court fully and fairly reviewed the evidence,” the judge said, stating that the case was “based entirely on circumstantial evidence. The inference of guilt must be the only one that can fairly and reasonably be drawn from the evidence.”

Hillary faced 25 years in prison if convicted of the second-degree murder charges.

The eruption of cheers from Hillary’s family and friends was in stark contrast to the audible sobbing from the Phillips family.

“Nick knew he was innocent and had faith in the system,” Norman Siegel, one of Hillary’s attorneys, told the press. “This chapter … ends on a positive note.”

After hearing the verdict, Hillary, 42, a former soccer star and coach at Clarkson University, embraced his attorneys, relieved that the five-year ordeal had finally come to an end.

“I feel a huge burden has been alleviated,” Hillary told the Amsterdam News. “And I commend the exceptional work of the legal team on my behalf.”

Even so, there were words of sorrow. Hillary stated, “I continue to pray for the family because they have suffered a loss.” Earlier in an interview he told reporters, “Being a father … I’ve worked with many young men … I myself was robbed short of being able to grieve [Garrett’s death].”

Meanwhile, District Attorney Mary Rain, who had prosecuted the case, stood with the Phillips family and said, “I’m sorry.” A call to her office was not returned as we went to press.

At a press conference which restricted certain individuals, Rain promised not to pursue the case to find the killer or killers, apparently comfortable that their case against Hillary is correct.

Siegel said when recounting the case that there was “no credible evidence” linking Hillary to the crime. “No hairs; no blood; no fiber; no fingerprints. No issue linked Hillary to the crime scene.” “Despite all the emotion and pain in that courtroom,” Siegel continued, “[Judge Catena] applied the law to the facts.”

In an interview with the Amsterdam News, Siegel again commented on the judge’s decision. “He did the right thing and sometimes our criminal justice system works.”

Much of the emotion in the case and the subsequent trial was centered on race, though the defense veered away from raising it in a case where the defendant was Black and the victim was white. From the very start of the investigation of Phillips’ murder, Hillary was the prime and only suspect for the DA. He was under suspicion for allegedly committing the crime in retaliation for Phillips’ role in ending the relationship between Hillary and Phillips’ mother, Tandy Cyrus.

The defense based its approach on the facts or the lack thereof after Hillary had opted to have a bench trial.

During his closing arguments on Thursday, defense attorney Earl Ward summarized the case, stating that the prosecution had “a torn and tattered quilt” of a case, built on circumstantial evidence. One of the key pieces of circumstantial evidence was a video that showed Hillary’s car passing Phillips as he headed home from school. This was, in their opinion, part of Hillary’s “hunting” the boy.

Still pending is Hillary’s civil rights lawsuit against the Potsdam Police and the Village of Potsdam. He has charged them with false imprisonment upon being questioned for two days in which he claims to have suffered “physical and psychological trauma.”

“Right now my focus is on my family and I will get to the lawsuit later,” Hillary said, finally able to exhale after many years of accusations and tribulation.