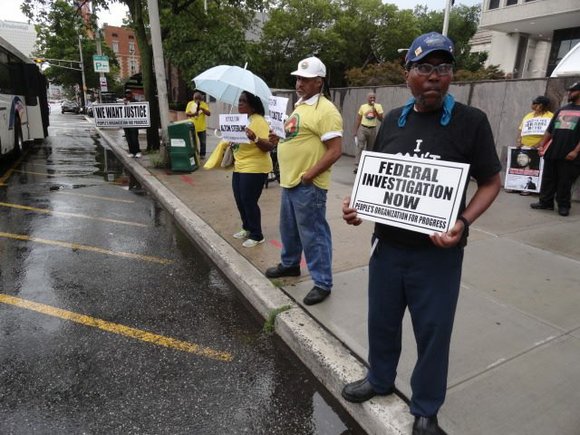 On Labor Day, the People’s Organization for Progress hosted a “Day of Outrage” protest rally to condemn the failure of the Justice Department to indict the officers who shot and killed Jerame Reid in Bridgeton, N.J.

Demonstrators gathered at the Peter Rodino Federal Building in Newark. The decision to not indict the officers came down Aug. 22 and sparked outrage and prompted demonstrations.

The Reid case is the only case of the four in which actual video footage captured images of officers shooting a civilian. The rally also protested other recent police shooting cases in New Jersey, including the shooting deaths of Abdul Kamal in Irvington and Kashad Ashford in Lyndhurst, and the police shooting of 14-year-old Radazz Hearns in Trenton. Hearns survived his violent ordeal and faces charges.

Friday, Sept. 9, the P.O.P is cohosting a rally to express support for a work stoppage within prisons across the country at the Essex County Courthouse in Newark. The work stoppage is being called to bring attention the conditions and brutality in the nation’s prisons and to observe the anniversary of the Attica Prison Uprising in 1971.