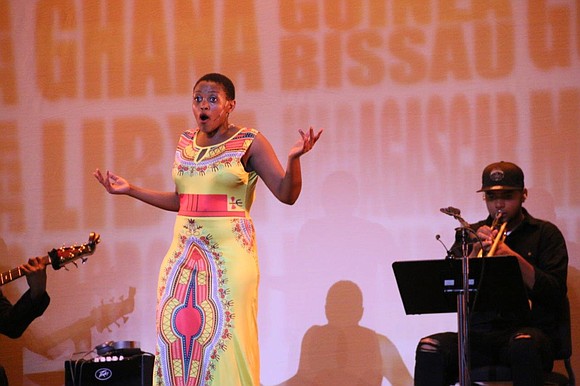 In the early 1960s she was introduced to the world by singer and activist Harry Belafonte, singing in her incredible, unique South African vocalizing style of yells, chants, hums and scats woven into the electrifying soulfulness and spiritual vibrations of African music. Known for her famous song “Pata,” recorded in 1957 and released in the United States in 1967, she was the first African artist to popularize African music worldwide. To the world she would be known as Miriam Zenzi Makeba, but to her close friends and beloved close family she was simply known as “Ma Z.”

On a recent Monday evening, Ma Z’s incredible life story was told for over two hours in “Miriam Makeba: Mama Africa the Musical” in a magnificent production of 40 amazing South African dancers and singers that premiered at New York University.

This colorful production depicted Makeba’s complex and fascinating story from birth through the duration of her life as the Grammy Award-winning international singer, anti-apartheid activist, distinguished diplomat, positive role model and visionary, dealing with many personal adversities, domestic upheavals, injustices and deep tribulations while exiled from her beloved South African homeland for 40 years.

Makeba’s story is told from her humble beginning during the apartheid era in South Africa, highlighting the horrific killings of the Sharpeville Massacre, the imprisonment of Nelson Mandela, her marriages to Hugh Masekela and Stokely Carmichael, the ban of her passport, denying her entrance back to her beloved homeland, her diagnosis of cancer, to her grieving the death of her daughter, Bongi. However, despite the various challenges and tragedies in her personal life, Makeba is depicted as a powerful influence on the struggle for liberation in South Africa. As Mandela said, “Mama Africa’s powerful singing voice inspired our people and comrades worldwide to continue fighting for liberation to eliminate apartheid in South Africa.”

Internationally, Makeba’s life is told through the civil rights era in the United States, Dr. Martin Luther King’s assassination, her meeting with President Kennedy and her performances with Harry Belafonte.

“Miriam Makeba: Mama Africa the Musical” is an inspirational, universal story of a humble yet world-renowned singer who inspired the revolution that destroyed apartheid, which resulted in the release of Nelson Mandela after he served 27 years in prison.

For more information regarding the future tour of this historic production, visit their official website at www.mamaafricathemusical.com.