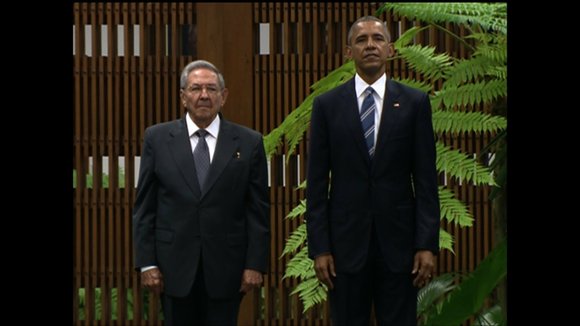 A day after making an historic arrival in Cuba, President Barack Obama met with lCuban leader Raul Castro as part of his efforts to elicit change on the island. POOL photo

HAVANA (CNN) -- A day after making a historic arrival in Cuba, President Barack Obama met Monday with the leader of the authoritarian regime here as part of his efforts to elicit change on the island.

Obama and Cuban leader Raul Castro shook hands at the Palace of the Revolution in Old Havana before their sit-down, the third time the pair have met for bilateral talks since the resumption of diplomatic relations in 2014. It was unclear whether the leaders would later take questions from the press.

Obama started his morning laying a wreath by the Jose Marti memorial, a massive monument to the Cuban revolutionary leader where a Cuban military band played the "Star Spangled Banner," another in a series of previously unthinkable moments that marks this week's visit.

In an elaborate welcome ceremony, Obama and Castro met with smiles and brief conversation before moving down long hallways lined with Cuban troops. Obama was overheard telling the Cuban leader he enjoyed his tour of Havana Sunday night along with his family.

He also told Castro he had a "great" dinner at a "paladar" -- one of hundreds of privately run restaurants that only recently became permissible in the state-run economy. Those types of businesses, along with new investments from American firms, give U.S. officials hope that Cuba is on a path to open its economy after decades of isolation.

The meeting provides Obama and his aides another reality check on their mission to extract reforms from Castro. Until this point, there have been few signs that the government here is willing to work as quickly as the Obama administration hoped in opening the state-run economy and improving human rights.

"Change is going to happen here and I think that Raul Castro understands that," Obama said in an interview with ABC News taped Sunday night.

"Our intention has been to get the ball rolling, knowing that change wasn't going to happen overnight," Obama said. "Although we still have significant differences around human rights and individual liberties inside of Cuba, we felt that coming now would maximize our ability to prompt more change."

The vast differences between the Obama administration and the Castro regime were no less evident Sunday as Havana hurried to prepare for the U.S. president's arrival. As Obama was en route, scores of anti-Castro dissidents from the group Ladies in White were arrested and detained after their weekly protest in Havana. CNN witnessed dozens of protesters being driven from the site in buses.

The group consists largely of women who have been arrested and imprisoned for speaking out against the government here.

Jose Daniel Ferrer, a Cuban dissident who was imprisoned for eight years beginning in 2008, said Obama could harness the attention from his trip to make a loud demand for political reform, citing President Ronald Reagan's demand in 1987 for the Soviet Union to "tear down this wall."

But Ferrer, speaking with CNN in his home Sunday, conceded that even incremental change is beneficial to the island's politically oppressed citizenry.

"Obama's visit is good for the people and good for the cause," he said. Ferrer is among the dissidents meeting Obama on Tuesday.

Just before Obama stepped from Air Force One Sunday -- carrying an umbrella as a persistent rain fell on the tarmac -- he sent a message to Cubans on a platform that until recently would have been unheard of in the repressive regime.

At the airport, Obama was met by a low-wattage greeting party that didn't include Castro, a fact GOP presidential front-runner Donald Trump and other Republicans deemed a snub.

"I've flown on that wonderful airplane that landed there," said former Sen. Mel Martinez, a Republican from Florida. "I always dream of that plane returning to Cuba, but I always thought that it would happen under different conditions, when there was a Cuban president who would meet him at the airport, and show him that kind of respect, but also that was elected by the Cuban people."

White House officials, however, said they felt no umbrage and noted that heads of state don't often come to the airport to greet visiting leaders.

Obama also faced criticism from Cuban-American Ted Cruz, a Texas senator and another Republican presidential candidate who said he wouldn't visit under the current political conditions.

In a Politico op-ed, Cruz called the visit "so sad, and so injurious to our future as well as Cuba's, that Obama has chosen to legitimize the corrupt and oppressive Castro regime with his presence on the island."

Cruz wrote that Obama's visit sends a message to political prisoners in Cuba that "the world has forgotten about you."

"There will be no mojitos at the U.S. Embassy for them," the Texas senator wrote, jabbing Obama's visit, which included a formal welcoming ceremony and a state dinner at the Revolutionary Palace.

On Sunday, Obama's interactions with everyday Cubans were carefully calibrated. He toured the Cathedral of the Virgin Mary of the Immaculate Conception, greeting Cardinal Jaime Ortega, a key proponent of improving ties between the U.S. and Cuba. Crowds had gathered in the faded colonial streets of Old Havana to glimpse Obama and his family as they passed through on foot.

The presidential trip to Havana is the culmination of a three-year effort to restore ties to the island, which sits 90 miles from Key West, Florida, but has long been off-limits for most American visitors. For decades, the island was regarded as a Cold War adversary, a forbidden place run by bearded strongmen that residents fled on makeshift rafts.

With his family in tow, Obama hopes to change that perception, highlighting the country's emerging private economy and meeting with outspoken opponents of the Castro regime. Before he departed, Obama met with Cuban-Americans in a bid to garner support for his diplomatic thaw, which is still met with skepticism among many in the large Cuban diaspora in South Florida and elsewhere. Many Republicans, particularly GOP presidential candidates, have also lambasted the move.

With relaxed restrictions on who can travel to Cuba, many more Americans will now be able to follow the Obamas' lead. And administration officials hope improved economic ties can foster a new dynamic between individual Cubans and Americans.

While Monday is focused largely on the Cuban government --- including a state dinner at the Revolutionary Palace Monday night --- Obama during his trip will also peel away for less formal encounters, allowing the presidential spotlight to also shine on ordinary Cubans living in a new era, including during an address to the Cuban people broadcast on state television and the meeting with anti-Castro dissidents.

Before he departs Tuesday, Obama will watch the Cuban national baseball team play the Tampa Bay Rays, in town for an exhibition game as U.S. Major League Baseball works to update immigration rules for Cuban players.

The sight of a sitting American president setting foot on the island was a novelty for most Cubans. The last U.S. leader to visit was Calvin Coolidge, who voyaged into Havana Harbor on a battleship in 1928.