Longer lengths and details for spring 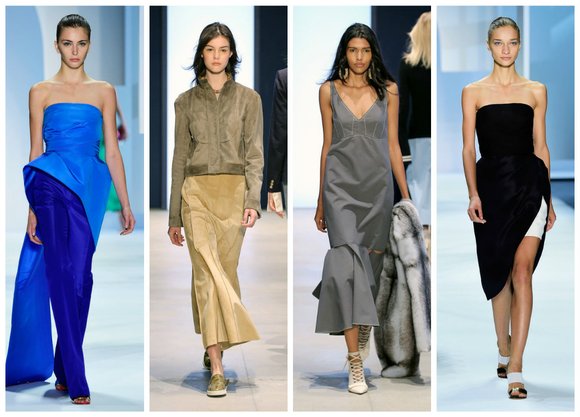 At Derek Lam’s spring/summer ’16 show for New York Fashion Week, coat and dress lengths were longer, below the knee, reminiscent of the 1940s and ’50s. According to the Women’s History Network, “Skirt and dress lengths can indicate a country’s wealth, prosperity and general well-being.” The stunning gold-toned dress (designed by Narcisco Rodriguez), worn by First Lady Michelle Obama at President Obama’s last State of the Union Address, was a bit long. Lam’s lengths are a good indication of fashion’s ever changing modes. At the show, his styles were tailored and conservative. The belted raincoat, one of his strongest looks, received applause.

Known for its calculated simplicity and thoughtful detailing, the Derek Lam brand was founded in 2002 by Derek Lam and Jan-Hendrik Schlottmann, CEO. Their company created luxury products with a modern sensibility. Their collections include women’s clothing, shoes, handbags and eyewear.

For special occasions, designer Monique Lhuillier’s looks focused on lengthier lines on the body. Her lace looks even showed up on this season’s recent Golden Globe red carpet.

An internationally recognized American designer, Lhuillier designs collections that are both feminine and modern. She continues to design ready-to-wear, accessories and bridal lines. Her looks are luxurious, chic and true to her aesthetic. Lhuillier’s signature design sensibility has led to the launch of licensed products that include fur, fine jewelry and table-top items, which transforms her company into a lifestyle brand.

Lhuiller established the company with her husband Tom Bugbee in 1996. Her designs capture the essence of sophisticated luxury by evoking femininity, allure and glamour. Lhuiller’s love for fashion has been a lifelong passion. She had early experiences in fashion with her mother while growing up in the Philippines. She worked alongside her mother, whose own sense of personal style and elegance were influences for the designer.

Enamored by fashion, Lhuiller was encouraged to pursue her dreams to become a designer. Her spring/summer 2016 collection was simply splendid.