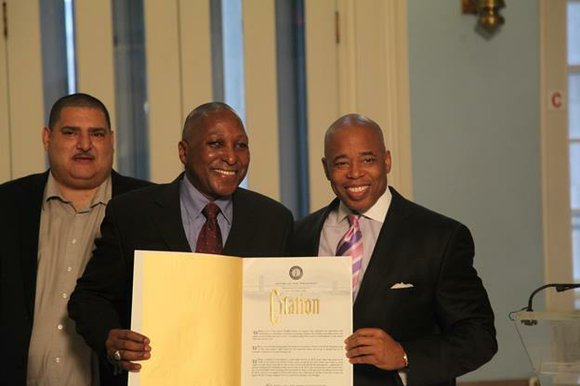 Brooklyn Borough President Eric L. Adams recognizes MTA station agent Ralph Johnson as “Hero of the Month” for December during a ceremony in Brooklyn Borough Hall, after his rescue of a woman on the subway tracks at the Franklin Avenue station in Crown Heights. Also pictured is Derick Echevarria, vice president of stations for TWU Local 100. Patrick Rheaume/Brooklyn BP’s Office

Yesterday, Brooklyn Borough President Eric L. Adams paid tribute to a Metropolitan Transportation Authority worker who rescued a woman on the subway tracks at the Franklin Avenue station in Crown Heights. Ralph Johnson, a station agent and member of Transport Workers Union Local 100, was declared “Hero of the Month” for December at a ceremony in Brooklyn Borough Hall to recognize his quick thinking and bravery. This announcement is a continuation of Borough President Adams’ monthly “Hero of the Month” events honoring the accomplishments of Brooklynites from all walks of life.

“Ralph Johnson could never have imagined that he would have an opportunity to demonstrate his heroism when he arrived early for a shift on Labor Day,” said Adams. “We now know that he had that capacity within himself, the capacity to risk his life to prevent death or serious harm to another individual. From my days wearing NYPD blue, I can truly appreciate the difficulty of situations when instant reaction and response is needed to save lives. This example should inspire us to act with similar compassion to protect individuals who are in trouble.”

Monday, Sept. 7, Ralph Johnson arrived early for his work shift. He noticed that a woman had fallen onto the tracks. The 63-year-old Johnson jumped onto the tracks and alerted a train entering the station to stop. After stopping the train, he, with the assistance of two police officers, returned the woman to safety on the platform.

“Ralph Johnson jumped into an incredibly dangerous situation in order to save another’s life,” said John Samuelsen, president of TWU Local 100. “He didn’t wait for someone else to take action. He used his training and got the job done. That’s what transit workers do. He’s a hero, and we’re proud to have him as a Local 100 member.”

“Mr. Johnson’s brave actions and quick thinking exemplify the many ways that MTA workers often go above the call of duty to help customers and, sometimes, to save a life,” said Wynton Habersham, acting senior vice president for subways of the New York City Transit Authority. “He arrived to work early that day in September to familiarize himself with a new assignment. In doing so, he was on the platform just as a woman, who had fallen onto the tracks, needed help. He put aside his own safety when he jumped down onto the tracks to come to her aid and to stop an oncoming train before it was too late. We are very proud to call Mr. Johnson a member of the NYCTA family.”

Additionally, Adams celebrated two good Samaritans who were recent “Heroes of the Month” and were cited for their deeds at an earlier time. Michael Matusiak, a mechanic from Greenpoint, was posthumously named “Hero of the Month” for October for standing up to several thugs attempting to smash into parked vehicles in East Williamsburg. Matusiak was fatally shot during the incident on Tuesday, Oct. 6, leaving behind a fiancée and two daughters. Delroy Simmonds was awarded “Hero of the Month” for November because of his valor while traveling to a job interview Tuesday, Oct. 27, when a strong gust of wind blew a 9-month-old boy onto the subway tracks at the Van Siclen Avenue station in Cypress Hills. As a train approached, Simmonds jumped down onto the tracks and hoisted the bleeding infant—still strapped into his stroller—to safety on the platform.