Civil unrest in Milwaukee after cops kill another Black man 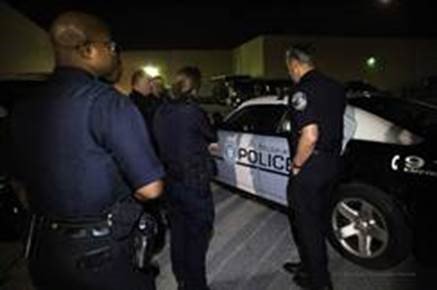 An officer was taken to the hospital for injuries after a thrown rock breaks the windshield of squad near Sherman & Burleigh according to Milwaukee Police. Milwaukee Police

Another weekend. Another police-involved shooting. Another bout of civil unrest.

Sunday morning people woke up to news images a Milwaukee ablaze, and major unrest and riot-geared police facing off with an irate and grieving Black community.

Milwaukee is fifth-largest city in the Midwest with a Black population of 40 percent. The recent police shooting of a Black man in the city sparked an uprising in its aftermath and put a spotlight on racial tension and oppression in the Brew City.

On Aug. 13, police pulled over two 23-year-old Black men for “suspicious activity.” The men allegedly fled on foot and one of them, Sylville Smith, was shot twice in the chest and he died at the scene.

Officers said Smith was armed with a semi-automatic handgun carrying 23 rounds that was stolen in March.

The officer who killed Smith was identified as Dominique Heaggan-Brown, who is Black. He was wearing a body camera during the incident. Law enforcement officials said Smith pointed a gun at Heaggan-Brown, according to the body camera footage, which has not been publicly released.

“He should have been tased, if anything,” Smith’s sister, Kimberly Neal, said. “We want everybody to feel our pain.”

This is a community enraged and still reeling in the aftermath of the 2014 14-bullet killing of mentally ill Dontre Hamilton, by un-indicted Milwaukee cop, Christopher Manney.

He noted that “the urban pathologies have to be addressed to shrink the growth of an underclass.” Writing in The Hill he stated, “What happened Saturday night and again Sunday night had little to do with police use of force—it was a collapse of the social order where tribal behavior leads to reacting to circumstances instead of waiting for facts to emerge.”

Clarke became political when he added, “The actions were the manifestation of a population with no hope, no stake in the American dream that could provide advancement and purpose and pride of self. They are the ones lied to, exploited by and ultimately manipulated by the Democrats who claim to care. They are victims of the left, but they are not without blame.”

Rep. Mandela Barnes, a second-term state representative for Wisconsin’s 11th Assembly District said in a published interview, “Milwaukee’s been a very tense place to live, because of all the gross inequities. We look at us leading the nation in Black … incarceration. You look at the Black male joblessness rate that is over 50 percent. You also look at other factors. You look at the poverty rate. You look at the Black-white achievement gap, which is really an opportunity gap for our Black and white students. All these factors, they didn’t happen overnight. So it’s not just one thing that actually led to what’s going on, what you’re seeing, the uprising in the city of Milwaukee. As leaders we’re really conflicted and challenged, because we hate to see our city burn, literally. We want to see people come together. But we also understand the frustrations of so many people who are dealing with a lot of this inequality.”

In accordance with state law on police shootings, the Wisconsin Department of Justice is leading the investigation into the shooting.

Just hours after the shooting, protests ensued in Milwaukee. That night, word on social media brought out a reported 100 protesters to the streets. The demonstration turned violent. Police and civilian cars were set on fire.

A BP gas station, an O’Reilly Auto Parts shop, a beauty supply store and a bank were also set ablaze. Gunshots were allegedly heard during the demonstration. A cell phone store, liquor store and supermarket were among the businesses that were looted.

Sunday, Mayor Tom Barrett urged parents to keep their children home. A peaceful protest was held at a police station in which 100 people participated. That night, protesters reportedly threw objects at police, and one person was shot in the neck.

A curfew was put in place Monday night for teenagers and a vehicle and dumpster were set on fire, along with one store having its windows broken.

“We cannot allow for a repeat of what happened (Saturday) night,” he said. “I am going to utilize all available resources to accomplish that.”

Now that the fires are out and the demonstrations appear to have calmed down, the nation is learning about the plight of African-Americans in Milwaukee. Blacks deal with high unemployment, allegations of abuse by police and mass incarceration.

Milwaukee has been named the nation’s most segregated city, where Blacks live in the northern section of the city and whites residing in the south. The collapse of the manufacturing industry decades ago is blamed as a contributing factor that left Blacks with little opportunities.

“Institutional racism creates these problems,” Milwaukee NAACP Branch President Fred Royal said in one interview. “When you have systems in place that have been used for their privilege for years and have failed to meet the needs of another community, it may be that they will only identify with that type of outcry.”

Nearly 70 percent of Milwaukee’s Black children attend hyper-segregated schools. Wisconsin has also been a hotbed for controversial voter ID laws aimed to cut down on the Black vote. Segregation is caused by no reliable public transportation linking Black areas to other areas of Milwaukee where people could find work.