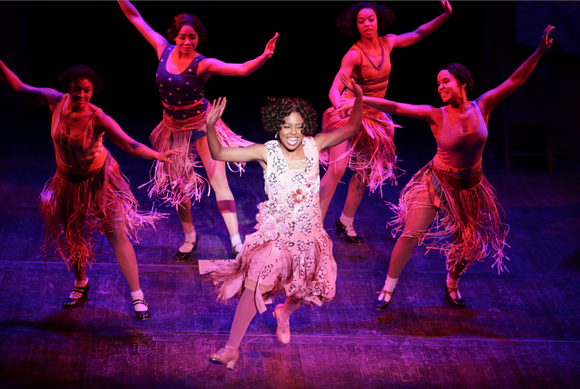 When “Shuffle Along or the Making of the Musical Sensation of 1921 and All That Followed” opens this month at the Music Box Theatre, it won’t be tap dancer Savion Glover’s first time on Broadway. In fact, the 42-year-old Glover’s name first appeared in lights when he debuted at 12-years-old in “The Tap Dance Kid” and stole the hearts of audiences and critics alike while dancing alongside his mentor, the legendary Gregory Hines. Other hits followed, including “Bring in ‘Da Noise, Bring in ‘Da Funk,” for which he won a Tony Award,“Jelly’s Last Jam,” and “Black and Blue,” all of which, like this new production, featured a collaboration with noted director/writer George C. Wolfe, who also has a list of awards as long as Carmello Anthony’s arm.

For Glover, “Shuffle Along” is a little different from those previous shows. This time, while audiences will be dazzled by the rapid-fire, rat-a-tat-tat of his tap style, they won’t see him dance. Instead of watching Glover hunched over, knees bent, dreadlocks flying, in a zone as his size 12EE tap shoes hit the boards with an explosive volley capable of bringing folks to their feet, they’ll see a chorus line of amazing dancers doing the steps Glover taught them.

Will critics proclaim that Glover has, once again, stolen audience’s hearts when the show opens? Only time will tell. But, if the enthusiastic applause during the sold-out previews is any indication, Glover and Wolfe could have another hit on their hands.

Watching the show a few days before interviewing Glover at the theater one evening before curtain time, it was clear “Shuffle Along“ will owe its success to Glover and Wolfe, as well as to an impressive creative team that includes Audra McDonald, Brian Stokes Mitchell, Billy Porter, Brandon Victor Dixon, Joshua Henry, Brooks Ashmanskas, Adrienne Warren, Amber Iman and a talented chorus line.

Taking time out of a busy schedule to talk about the show, Glover described how the production was borne. “Well, it started with several conversations,” he said. “George and I knew we wanted to work together again. We pitched several different concepts to each other. Then, in one of our meetings, he said he’d been looking at the original ‘Shuffle Along,’ the first Black Broadway musical back in 1921, and all that it did. He wanted to explore that—not do a revival of it, but just explore the possibility of using the music to tell the stories of the people who were involved.”

Fans of “Bring in ‘Da Noise, Bring in ‘Da Funk” and its unique way of capturing the journey from slavery to the present, know what that means. Glover added, “The direction George has taken allows audiences to not only know about the 1921 ‘Shuffle Along’ but, through his ‘edutainment,’ to learn what Black performers went through and in some cases are still going through.”

Yes, there is a glimpse of blackface and one use of the N-word. But there is also “Love Will Find a Way,” the first time a Black man and woman sang a love song to one another onstage. And, there is so much more that allows the show to teach and/or remind us what folks endured to become giants who changed American culture. There are the show’s creative teams—Noble Sissle and Eubie Blake and Flournoy Miller and Aubrey Lyles—and stars Lottie Gee and Florence Mills, as well as folks who emerged from both the show and the Harlem Renaissance era it helped to spark—James Reese Europe, Aida Overton Walker, Carl Van Vechten, Langston Hughes and Zora Neale Hurston. There’s even a program insert for the 1921 “Shuffle Along” that includes bios and photos of the originators and cast as well as a Who’s Who that includes Josephine Baker and Paul Robeson.