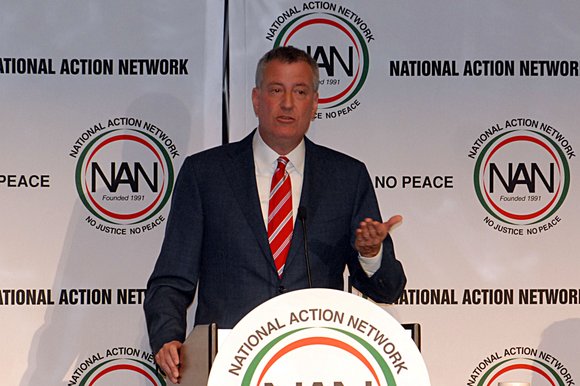 Special to the AmNews

Mayor Bill de Blasio and Minority and Women-Owned Business Enterprise Director Maya Wiley announced Sept. 28 that New York City has awarded over $1.6 billion in contracts to MWBEs in fiscal year 2015. The city is on track to meet the administration’s ambitious goal of awarding $16 billion in MWBE contracts across agencies over the next 10 years.

“Increasing our city spending on minority and women-owned business enterprises is a critical tool to reducing inequality, and we are proud to announce over $1.6 billion in awards to our city’s MWBEs,” said de Blasio in a press release. “We are committed to leveraging every tool to meet our goal of spending $16 billion over the next 10 years, and we will hold every agency accountable in this process.”

The administration released the first citywide report on MWBE awarding across all agencies, reporting awards for every agency, including non-mayoral agencies and authorities. In July, the mayor issued a directive to all agencies proposing new accountability measures to increase MWBE contracting. The city also reached a record-breaking number of certified MWBEs in fiscal year 2015—over 4,100. Roughly 1,500 of those have been certified since the start of the de Blasio administration.

To help increase certification, the administration got rid of red tape, making it easier to certify and re-certify online, introducing one-on-one certification application review sessions and improving the Payee Information Portal to better identify and reach out to firms that are minority- or women-owned but may not be certified.

“The city is making strong progress on expanding opportunity for MWBEs, but we have more work to do,” said Wiley. “We’ve invested more effort and prioritized growing this program than any administration in history, but we won’t rest until MWBEs have the same opportunities to prosper in this great city as the successful firms who’ve come before them.”

The city is also pursuing legislation in Albany that would give the city wider legal authority to create opportunities for MWBEs. That legislation, which passed the Assembly in June, would, for example, grant the city the same authority the state has to make discretionary awards up to $200,000 to MWBEs.