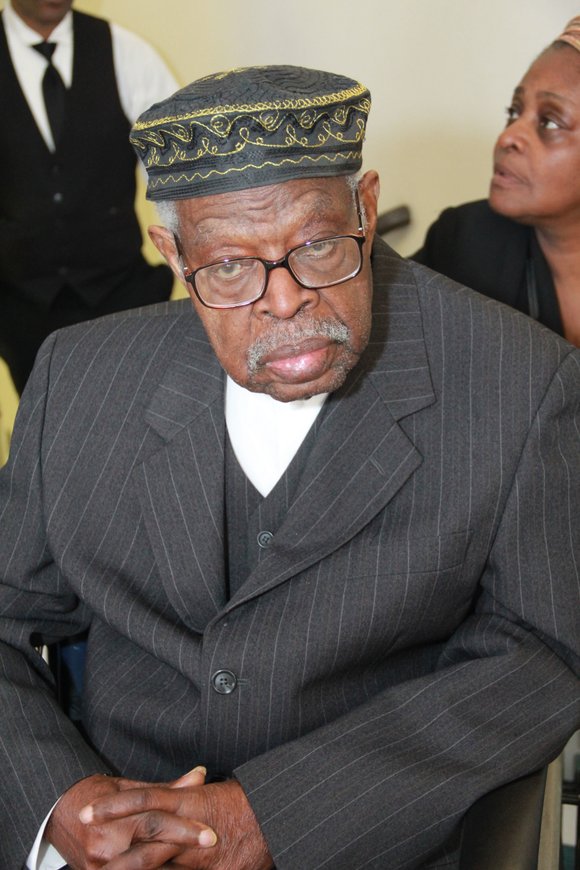 “He is our king. He is our ‘Nisut Bity’ [pharaoh] and he was our father.” These were the words of Alfredo, Ruth, Dawn, Naomi and Kwame (Johannes), the children of the now late Dr. Yosef Alfredo Antonio ben-Jochannan.

The tributes have been numerous and are continuing for the Black Man of the Nile. Having known “Dr. Ben,” as he is affectionately known, for many years from England to the U.S., this journalist was asked to attend the meeting and bear witness to the proceedings during the organizing of his funeral. As of press time, therefore, the Amsterdam News can announce that the viewing will take place Thursday, April 9 from 4 p.m. to

“The viewing and the funeral will be at the historic Abyssinian Baptist Church,” professor James Smalls told the Amsterdam News. “We ask that the community respects the decision of the family as they make these final arrangements.”

“The family of Dr. Yosef Ben Jochannan extends their sincere thanks, appreciation and gratitude to all for your continued love and support,” Dawn Johannes told the Amsterdam News.“The family is finalizing funeral arrangements to honor and celebrate the life and legacy of their beloved father.”

It will no doubt be a grand affair, with scholars, students and friends and family of this amazing educator traveling from all over the world to attend the services.

“We want the rights of a king,” said Ruth Johannes.

“It was a meeting with family members and community leaders where the decision was made to go forward with a date in mid-April,” said activist Brother Reggie Marbry. “We are asking the community who are anxiously asking for details to give the family time to organize these final arrangements.”

March 19 at 3:30 a.m., the great Egyptologist made his transition. He was 97 years young, and the master teacher was surrounded by his family at Bay Park Nursing Home in the Bronx’s Co-op City.

There has been a global major out-pouring of condolences for this world-renowned Ethiopian-born historian.

Head of Harlem’s Mosque No.7, Minister Abdul Hafeez Muhammad, told the Amsterdam News that on behalf of Minister Farrakhan and the Nation of Islam, he offered “condolences and steadfast prayers for the family of our beloved brother and historian, Dr. Yosef ben-Jochannan.”

Muhammad stated, “This great Black man of the Nile will be missed by all of us who were blessed to know him, live with him, serve with him and be taught by him. Dr. Ben received all of us with respect and an open ear, yet he was always confident in what Allah blessed him to know and teach.

“To his beloved sons and daughters, may Allah continue to comfort you and bring you ease of mind and spirit, as we salute you and thank you for all the years of sacrifice of your father so that the Black nation and the world would benefit from his vast contributions.”

The minister said that through his position with the NOI in New York, he was blessed to know this great master teacher. “Our Minister Farrakhan loved Dr. Ben and Dr. Ben loved Minister Louis Farrakhan as well,” he concluded.

Imam Al-Hajj Talib ‘Abdur-Rashid declared, “The Sunni Muslim African-American community joins the world in celebrating the life works and accomplishments of the late Dr. Yosef Alfredo Antonio ben-Jochannan, known affectionately to us all as ‘Dr. Ben.’ He was an extraordinary scholar whose achievements speak for themselves. But for those of us who are Muslims, the most extraordinary thing about him was his acceptance of the religion of Al-Islam, after so many years of being at odds with its teachings, and subsequently with Muslims.”

“acceptance of the faith demonstrates that neither fame nor acclaim prevented him from keeping an open mind in his quest for knowledge. After becoming a Muslim, which he personally affirmed to me, he openly prayed the traditional salaat of the Muslims at Friday prayers at the Mosque of Islamic Brotherhood, and most often at Harlem Hospital, as well as Harlem inter-communal prayers offered by African-American mosques on the Muslim high-holy day of Eidul-Adha, while his health allowed him to do so. Additionally, he had been professor-at-large at Al-Azhar University in Cairo, Egypt, teaching Nile Valley civilization.”

The Amsterdam News and Amsterdamnews.com will keep our readers up-to-date on the funeral arrangements for Jochannan.