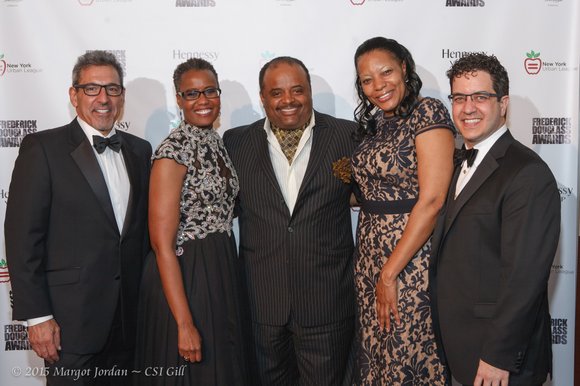 The New York Urban League held its 50th anniversary Frederick Douglass Dinner Tuesday, May 19 at Pier Sixty. The organization, led by President and CEO Arva Rice, bestowed its Frederick Douglass Medallion on Dennis M. Walcott, the former chancellor of education for the New York City Department of Education and president and CEO of the New York Urban League, and corporate citizens GEICO and Macy’s. The evening also recognized Jason Franklin, CEO of Bolder Giving, with the Ann S. Kheel Award.

Rice reflected on Douglass’ words: “It is not light that we need, but fire; it is not the gentle shower, but thunder. We need the storm, the whirlwind, and the earthquake.” Rice challenged attendees, “I cannot help but think that for those of us who have been blessed to stand in the sun that it is our time to be the storm, to create a whirlwind and make the Earth quake.” 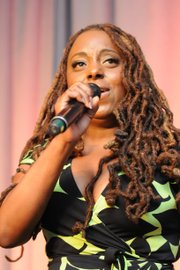 The Frederick Douglass Dinner is the New York Urban League’s annual spring fundraiser, which has raised over $650,000 to support its employment and education programs and operations. Fundraising efforts were led by business leaders and philanthropists William and Carol Sutton Lewis, Charles and Karen Phillips, Michael Robinson and Janine Dorsett, and corporate partner Moet Hennessy USA, which served as gala co-chairs. TV One anchor Roland Martin’s comedic and sincere call to action at the dinner captured the attention and altruism of the audience to help raise an additional $25,000 to support the Whitney M. Young Jr. Scholarship Fund and the NYUL STEM Initiative.

The Frederick Douglass Medallion for corporate citizenry was presented to Macy’s by Mayor David N. Dinkins, who noted the 42-year service of Ed Goldberg, senior vice president of government consumer affairs diversity vendor development. After Roland Martin’s turn as “Chief Fundraiser” for the evening, he redirected his attention to presenting the Frederick Douglass Medallion to John Pham, regional director of GEICO, who accepted the award on behalf of GEICO for their investment in diverse communities and NYUL workforce development programs that help create diverse and trained workforces. The evening closed with former Chancellor and current CEO of Amplify Joel Klein presenting Dennis Walcott with his Frederick Douglass Medallion, noting that Walcott has spent his careers living out Douglass’ admonition, “It is easier to raise strong children than repair broken men.”

Hugh Hogan, executive director of the North Star Fund, presented the Ann S. Kheel Award to Jason Franklin, Ph.D. Said Hogan, Mrs. Kheel “wanted people to examine their privilege and challenge themselves and others to overcome our troubled racial history in the U.S., and to support Black leaders who were doing something deeper about injustice.” The Frederick Douglass Award for Service to the New York Urban League was presented to an individual and corporation. This year’s inaugural honorees were Tammi Butler and the VH1 Brand Creative Team.

The black-tie event began with a reception and cocktails provided by event co-chair Moet Hennessey USA brands. The reception included a signature cocktail aptly named “The 50.” Actor Elijah Bland’s rendition of Frederick Douglass’ 1857 speech “West India Emancipation” set the tone for an evening, where attendees applauded the accomplishments of the awardees, were reminded of Douglass’ fiery rhetoric and action and challenged to do more to serve their communities. The night concluded with an acoustic music set by Grammy-nominated R&B singer-songwriter Ledisi and a dessert and dancing after party with music by DJ Kiss. The milestone anniversary event was hosted by Mistresses of Ceremonies, NBC4-NY anchor Shiba Russell, and NYUL Board Member and Carmen Rita Wong, president of Malecon Productions.