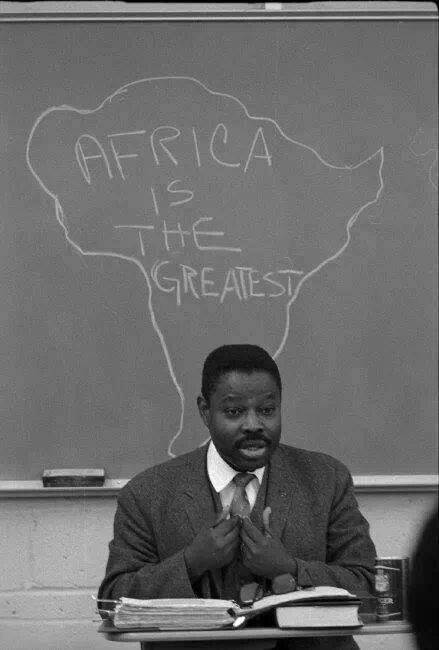 As family and friends prepare to commemorate the lifelong achievements of renowned factologist, Dr. Yosef A. A. ben-Jochannan, affectionately known as “Dr. Ben,” at Harlem’s Abyssinian Baptist Church, 132 W. 138th St., Thursday and Friday, April 9 and 10, thousands from all walks of life are expected to attend.

He was born Yosef Alfredo Antonio ben-Johannas, Dec. 31, 1918, in Ethiopia, the homeland of his father, Kriston ben-Jochannas. When he was 6 years old, the family moved to Fajardo, Puerto Rico, the native town of his mother, Julia Matta, where his younger sister was born.

The family practiced the Beta Israel way of life, and ben-Jochannan credited his parents for instilling the hardened discipline in him that allowed him to feed his insatiable appetite for knowledge.

When ben-Jochannan was a teenager, his father suggested he go to Egypt and study that country’s Black heritage. He made his first voyage there in 1938. And until the late 1990s, “Dr. Ben’s Alkebu-Lan Educational Tours” conducted annual fact-finding journeys to Egypt, taking hundreds at a time.

During his early years, ben-Jochannan also spent time in St. Croix, in the U.S. Virgin Islands, where he was heavily influenced by Pan-African pioneers Edward Wilmot Blyden and Hubert Harrison.

He was educated in Puerto Rico, Brazil, Cuba and Spain, earning degrees in engineering and anthropology, before migrating to Harlem in 1942. He soon linked up with Carlos Cooks and the progressive African Nationalist Pioneer Movement, advocates of self-sufficiency within the Black communities.

During the early 1950s, ben-Jochannan participated in Puerto Rico’s independence campaign, led by the revolutionary, Pedro Albizu-Campos, to liberate the Caribbean island from its imperialistic bond with the United States.

In the early 1960s, while in the highly volatile hotbed of Harlem, ben-Jochannan frequently spoke on the streets, persuading many to seek their glorious African ancestry. He became known as a revolutionary orator, spouting Afrocentric rhetoric at the progressive platform known as “African Square,” located at the four corners of seventh Avenue and 125th Street.

By 1964, he was suggesting extensive African-centered reading material to Brother Omawale—who had evolved from “Detroit Red” to Minister Malcolm X—and was a founding member of the Organization of Afro-American Unity.

For the next decade, ben-Jochannan was an instructor at various local institutions, including the Harlem Preparatory Academy and Malcolm-King: Harlem College Extension. He also assisted the HARYOU-ACT program.

Around this time, being motivated by the legacies of Afro-Borinqueno bibliographer Arturo Alfonso Schomburg, Jamaican-born J.A. Rogers and American historian Lewis Michaux, ben-Jochannan began self-publishing his books, many containing images with African features and medu-netcher (hieroglyphs); 1969’s “Blackman of the Nile” was the first.

In 1973, his intellectual partner Dr. John Henrik Clarke suggested that ben-Jochannan head Cornell University’s newly established Africana Studies program, where he stayed for 15 years. He also conducted classes at Al-Azhar University in Cairo, the largest Islamic institution in the world.

The trailblazer helped establish the Association for the Study of Classical African Civilizations in 1981, and in 1987 led more than 1,000 Americanized-Africans to the Nile Valley in the largest pilgrimage to the Motherland since Reconstruction.