A Special Gift for Children from Incarcerated Men 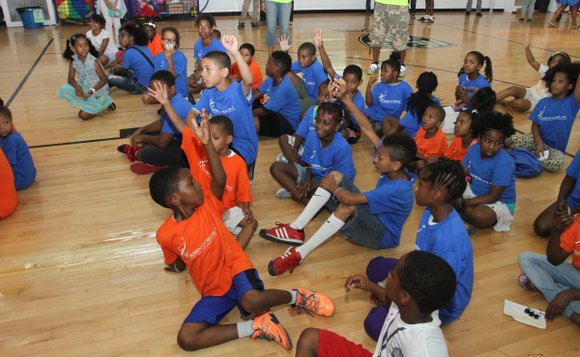 In one of the buildings of the historic First AME Zion Church’s complex,. Lem Peterkin

Aug. 28, an historic day—the 51st anniversary of the March on Washington—in one of the buildings of the historic First AME Zion Church’s complex, the children of Brooklyn were the beneficiaries of an historic act of charity. The day was filled with fun, food, grooming and gifts for the youths of the Children of Promise, a community-based nonprofit organization in Bed-Stuy, Brooklyn, whose mission is to embrace the children of incarcerated parents and empower them to break the cycle of intergenerational involvement in the criminal justice system.

The 150 children, ages 6 to 12, were in perpetual motion, playing games, jumping and screaming as they ran around the spacious gym. A surprise act was the Rev. Dr. Herbert Daughtry and Lem Peterkin, a freelance photographer, showing off their basketball skills to the amazement and cheers of adults and children.

After lunch, there were free haircuts for boys and hairstyling for girls, provided by Sabine Bellevue of Sabine’s Hallway Natural Hair Salon. There was an educational workshop conducted by Ayesha Hoda, the director of Justice by the Pen. The main feature of the day-long program was the gift of bookbags to the children, which were donated by the Civic Duty Initiative.

The CDI is a volunteer movement formed by inmates at Sullivan Correctional Facility in New York. The CDI helps the incarcerated and the formerly incarcerated give back to the low-income, urban neighborhoods they once helped destroy. They encourage the incarcerated to volunteer their time and talents in working with outside organizations.

The CDI was organized in March 2010 by Stanley Bellamy, Bruce Bryant, William Holmes and Joseph Robertson. Daughtry, the national minister of the House of the Lord Churches and an internationally known civil rights leader, who ministers to the men on a monthly basis and on special occasions, has been a mentor, teacher and spiritual counselor for more than five years to the inmate population.

“I was super pleased when the men approached me to assist them in forming the CDI,” said Daughtry. “I knew wonderful things would happen from their efforts. I have known some of these men for over five years. Some of them have become members of our church. They are men of high moral and ethical standards, and deep spirituality. They have acknowledged their wrongs and have put forth maximum efforts to make restitutions. They have also provided positive leadership for others in and out of the institution.”

Bryant, speaking on behalf of CDI, said, “Rev. Daughtry and DBNA are our community sponsors. More importantly, Rev. Daughtry is our mentor and role model. CDI is a reflection of him, as well as our own character, dedication and the commitment to serve our community.

“He has had a huge impact on our lives. He has supported our efforts to express our redeeming value, and change the image that society has of incarcerated and formerly incarcerated people.”