On the “A” w/Souleo: Yoga activists fight human trafficking 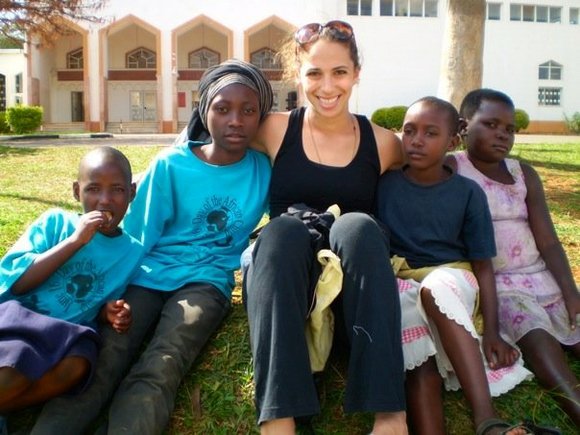 Lara Land, with some of the children of Rwanda Land, spent three months there teaching yoga to survivors of the nation's brutal genocide Courtesy of Lara land

Take a breath. Is it short and strained or is it deep and full? Posing this question to a victim of human trafficking may seem insignificant but according to Lara Land it is a crucial step in the rehabilitation of the more than 4,200 children served by the anti-trafficking organization, Odanadi Seva Trust.

Land, a yoga instructor and owner of Land Yoga in Harlem, was introduced to human trafficking victims during visits to India and Rwanda, where she has helped to rehabilitate HIV-positive students using yoga as therapy. On March 18 she will host a Bollywood-style fundraiser for victims of human trafficking at celebrity chef Marcus Samuelson's Red Rooster Harlem restaurant. On March 15, prior to Land’s fundraiser is the fifth annual, Yoga Stops Traffick, a global one-day initiative to raise awareness about modern day slavery and funds for Odanadi to address India’s rate of more than 100 million victims, including 1.2 million child prostitutes. These projects point to a growing number of yoga activists who utilize the practice to address political and social issues and share yoga with underserved populations. The goal is direct if not simple: use yoga to make the world a better place.

“Organized evil such as human trafficking occurs when a seed of hatred is allowed to grow. It starts with something small,” said Land. “Practicing yoga has the simple effect of making people feel better. Those who practice correctly tend to experience a calm and contentment as they walk through life. That feeling is equally contagious and does in fact lead to a better world.”

And yet the $27 billion yoga industry, designer yoga wear and bodies of yogis being touted as “perfect” may alienate those Land and other yoga activists most want to reach. For Land the only way to break down those barriers is to get off her mat and into communities where yoga holds little or no value. “It takes a real, human experience with members of those communities that are distrustful or resistant. You have to prove yourself to be qualified and valuable to their lives and recovery. My biggest challenge is how to positively affect and change lives at the scale that I want to and continue to offer the intensely personal individualized attention that is so key.”

As women across the world face the realities of human trafficking another group of women in the U.S. must deal with the financial challenges of raising a family. According to The Shriver Report, 42 million women and the 28 million children who depend on them are living at less than 200 percent of the federal poverty line, or in other terms, an annual income of $47,000 supporting a family of four. Although addressing this issue will involve large systemic changes there is one new web series aiming to empower women with advice, “The Root Live: Bring it to the Table.” The series addresses financial issues with experts offering salient tips on everything from money issues related to single parenthood to debt and job loss.

Harriette Cole of The Root Live: Bring it to the Table web series

“We live in a different world today. Families are structured differently with many single moms. Our program is a perfect response since each segment offers informative nuggets of solution-driven content for the audience,” said Michele Wilson, producer and director of the series.

On the show’s latest webisode is a discussion about the challenges that many single female parents face in managing finances. Guests include Sabrina Lamb, founding chief executive officer of WorldofMoney.org, Michaela angela Davis (her spelling), an image activist and unmarried parent and Juliana DeSouza, a financial adviser, providing information on savvy budgeting strategies.

“The information gleaned from each guest is valuable for every rung of our culture,” said Harriette Cole, executive producer and host. “We talk to our viewers in practical and realistic terms.”

With examples such as Land, Wilson and Cole there are many promising alternative ways to address serious issues impacting the lives of women.