Brandon J Dirden goes ‘All the Way’ as MLK 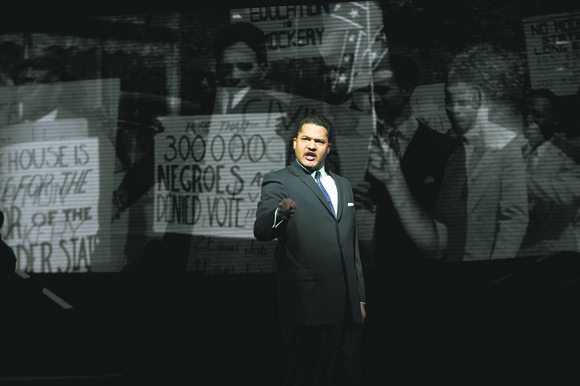 How do you bring one of the most famous civil rights activists in history to life? According to Brandon J. Dirden, who plays Martin Luther King Jr. in the new Broadway show “All the Way,” it takes a bit of humanity and a bit of research. Dirden, who recently won Obie, AUDELCO and Theater World awards for his role in “The Piano Lesson,” joins award-winning actor Bryan Cranston and a talented cast in this show about the first year of Lyndon B. Johnson’s presidency. Dirden spoke to the AmNews about his role as the iconic figure.

AmNews: What drew you to this role and this play?

Dirden: It’s not very often that you get to do a play on Broadway period, but a play that actually means something, not just to a specific group of people, but to America. I think the wonderful thing about this play is that it can only happen because of the circumstances of America, because of the promises that our founding fathers, [who were] comfortable with America’s greatest sin of slavery, and this is the point in America’s history that we finally decided in the 20th century where we’re going to answer to that, where we’re going to answer to the people that had been denied the principles that our forefathers set out to try and insure that everybody can have. And that’s solely American—no other country in this world could have the events of this play happen in their country. It’s specifically American, and that’s really what’s so attractive about it to me—the importance and the telling of our history.

Obviously, this is a big role, as a figure everyone knows in history—so how do you prepare for such a role? Everyone has this idea of Martin Luther King as a man, so what do you bring to that role?

You said something interesting, that people have this idea of Martin Luther King as a man, but in my experience, I think most people don’t really see him as a man the same way we see other men walking down the street. Most of us—rightfully so—revere him to the point where he’s almost above the men and women we see walking around today. His courage, his strength, his fortitude to fight for what’s right even though there’s a white man threatening him daily, to still continue, it’s almost godly. I think he’s been deified and iconicized to a great degree.

Looking at Dr. King through the lens of this play, what’s so attractive is that we start to see humanlike qualities. We see his struggles with incredibly tough decisions. We see a fractured home life. We see tension with different factions of the movement. Yet still, we see a man who is extremely courageous and is the Dr. King we know today—we see that in the play as well.

So I prepared for this in trying to see him as a real human who has very difficult decisions to make, and he sometimes didn’t make the right decisions but ultimately had the courage to always make the decisions he thought would benefit the most people and affect change. So it was about looking for that. How do we—without diminishing any of his legacy, without diminishing any of what he stood for—still present this figure as someone who’s very much like you and I, who had very human, real, flesh struggles? I think this play captures that beautifully without soiling his reputation.