On the “A” w/Souleo: Two art projects aim to rebuild community 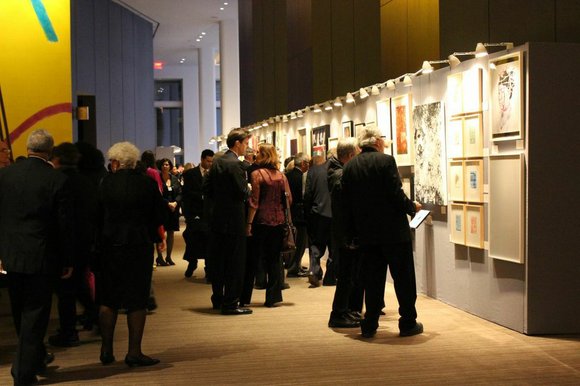 Can art serve as a catalyst for revitalizing neighborhoods? It’s a question being explored by two unique art projects: “Back in the Bronx,” a new campaign launched by the Bronx Museum of the Arts and Out to See, an art and music event focused on bringing attention to the South Street Seaport area post-Hurricane Sandy. Borne out of the need to increase private funding in a slow economy, “Back in the Bronx” reaches out to well-known Bronx natives such as Kerry Washington and Chazz Palminteri to raise greater awareness about the state of the borough.

The Bronx became a national symbol of urban decay in the 1970s with many longtime residents fleeing to the suburbs to escape arson fires, crime and poverty. While the borough still has challenges in the areas of poverty, unemployment and education there are signs of recovery over the past few years with new shopping malls, hotels and a forthcoming national ice sports center. The museum wants to add to that momentum.

“Our goal was to bring people back and show the vibrancy of the borough with a museum, economic stimulation and sports facilities. And our goal is to bring younger Bronxites together with older generations,” said Allison Chernow, the museum’s director of external affairs.

Currently of the museum’s 350 members, 30 percent live in the Bronx. To increase this percentage the museum is reimagining itself as a community hub. Efforts include engaging public programs, a council of local residents to advise on outreach strategies and free admission through 2015 made possibly by a $500,000 gift from philanthropists Shelley and Donald Rubin. Plus the museum just raised an estimated $770,000 at their spring gala on Monday which will likely help support community engagement programs.

“In our community with so few resources and not many cultural institutions it is important to be open and welcoming and invite the community in,” said Chernow.

On the other side of the city is the South Street Seaport, an area left devastated by Hurricane Sandy in 2012. Nearly a year and a half later the neighborhood has seen many businesses reopen. Out to See, a new art and music celebration hopes to boost the comeback with an added splash of culture. This past weekend 30 artists displayed work at 13 locations throughout the neighborhood. The idea behind the project is that artists can help communities identify new creative ways to preserve natural and cultural resources. Exhibiting artist Tattfoo Tan presented his Sustainable Organic Stewardship artwork that addresses the politics of healthy food and Alberto Borea’s work explored how public space is used and who has access to it.

Courtesy of Out to See

“It's important to make sure artists and cultural producers have the opportunity to have an impact on how neighborhoods evolve. Artists add to a heightened awareness of the public spaces we move through, and can contribute to an area's sense of identity that wouldn't otherwise be possible without art,” said Sara Reisman, independent curator and director of Percent for Art.

Reisman, who lived in South Street Seaport from 1999 to 2006 hopes to make Out to See a recurring event that like the museum will become an integral part of community rebuilding.